Legal Fireworks: A Horse's Ass of a Law 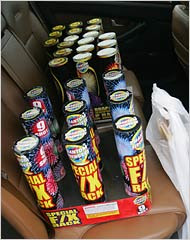 When Benjamin Franklin famously remarked that the law is an ass, a reference to the donkey, he could not have imagined a future law in his adopted that forbids fireworks sales to state residents but allows out-of-staters to by the explosives by the truckload.

This incongruity comes into sharp focus every Independence Day as residents of , which has an absolute ban on fireworks sales, transportation and use, stream into to purchase firecrackers, Roman candles, M80s, cherry bombs and sparklers.

This year alone, state police have confiscated nearly 8,000 pounds of fireworks ahead of Independence Day at crossings with , leading to 50 arrests.


Photograph byDith Pran/The New York Times
Posted by Shaun Mullen at 3:09 AM
Email ThisBlogThis!Share to TwitterShare to FacebookShare to Pinterest