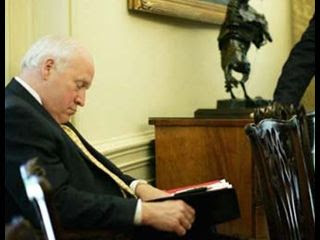 The big question following the Scooter Libby trial is not whether President Bush will pardon him (of course he will), but whether the (four) guilty verdicts against the veep's chief of staff as well as his latest medical boo-boo (a blood clot) will provide the opening that the prez needs to show the biggest drag on the presidency (beyond himself) the door.

My mind screams "No way, Jose" and Special Proecutor Patrick Fitzgerald has made it clear that he's not going after Dick Cheney. But others are not so sure.

Herewith a sampling of Cheney-centric reaction to the verdicts.

"Libby was, by all accounts, Dick Cheney's alter ego. There will thus be many questions asked about any association the Vice President may have had with Libby's crimes. A version of Howard Baker's questions during the Watergate hearings, posed about Nixon, will be foremost among them:

"What did the Vice President know? When did he know it?

"The Bush Administration, trying to assert its leadership on Iraq, the war on terrorists, and a number of domestic initiatives, may decide that they can't afford a drawn-out defense of the Vice President. Cheney, a loyal soldier, may also be able to use his new health issues as a convenient (and legitimate) reason for stepping down. His resignation would give Bush Administration critics one less thing to complain about. And the right replacement nominated by Mr. Bush could earn him points and goodwill."

Andrew Sullivan at The Daily Dish, noting Daniels' take, then jumps in:

"An alternative strategy would be to pardon Libby soon, as the National Review is proposing. But purely from a political standpoint, such a pardon would surely ignite a massive protest, turn this story into a much bigger one, and make many more Americans curious about why their own vice-president was more interested in tackling a domestic critic in the summer of 2003 than fighting the Iraq insurgency. The risk in not pardoning Libby, of course, is that he may begin to talk. Uh-oh. The aspens could be turning. And their roots are all connected."

From Sheryl Gay Stolberg in The New York Times:

"In legal terms, the jury has spoken in the Libby case. In political terms, Dick Cheney is still awaiting a judgment. . . .

"Mr. Cheney is arguably the most powerful vice president in American history, and perhaps the most secretive. The trial painted a portrait of a man immersed in the kind of political pushback that is common to all White Houses, yet often presumed to be the province of low-level political operatives, not the vice president of the ."

"The case laid bare the inner workings of a presidency under siege and the secretive world of Vice President Dick Cheney. . . .

The verdict 'does great damage to the Bush administration,'’ said Paul C. Light, professor of public service at New York University. 'It undermines the president’s pledge of ethical conduct. But the most serious consequence is that it will raise questions about Cheney’s durability in office. It may be time for Cheney to submit his resignation."

"But don’t count on it. Bush in the past has repeatedly come to the defense of his vice president."

From Joe Gandelman at The Moderate Voice:

"If there’s a big loser in this, it appears to be Cheney, who (unless his new illnesses eventually cause him to step down) now faces two years of constant and increased skepticism, his name being brought up at Congressional hearings, and becoming a 'high concept' symbol of the administration’s ruthlessness in going after those with whom it disagrees."

I'm bemused by all the oxygen being sucked out of the air on behest of our less educated conservative friends as they nervously take turns at the microphone and go into perplexing twisted detail about various paranoid tidbits they’ve been pulling out of their collective asses lately, as they try to rationalize/explain current events. Not just the guy that tells us it started with Cheney’s (turds) that were in the shape of #2 yellow Ticonderoga pencils, progressed to multi-colored spinning tops, and now he sez they look like small forest creatures, characters from Tolkien tales, astral projections of alien beings, and Rush Limbaugh. Now we've got prime time jugheads of every strip claiming no laws broken, no foul (although I purged myself of some significantly “off” clam chowder by gazing at a photo of Mike “Weiner” Savage for 5 seconds), no fems, no fatties, no mustaches, no pirates and no B.O.(Hey Coulter! Are you listening?). Is it that they anticipate a lot of time on their hands sooner than they think (idle hands, the devils work, and such)? Unemployed and irresponsible after the next election? What shall they do, what shall they do? Who's gonna walk them across the street if they've been bad? Lot's o' questions, no possible answer. Some say drugs is the answer. That, like George Bush, is too simple. Tried it, been there, done that. I'm thinking maybe coffee enemas or they’ll get a paper route. Seeking guidance on the big questions in life.

Okay, the nuns have threatened them with a large metal ruler, so they must get it straight, this time (harder for some than others). I’ll clarify it for you - It’s all very simple. I am bringing the salad, I will put my hat on the hook in the back of the classroom when I come over Fri., unless I have a note from my mother, in which case I'll put my coat on the hook and my hat on the shelf, that is if someone else has not put their hat on the shelf, in which case I'll put the note from my mother in my coat pocket, fold my coat in thirds, place it on the chair with my hat on top, if no one is sitting in the chair at the time. Or, I will not bring a salad, there are only three buttons on my coat, my note from my mother is in Portuguese, I will not go to confession after dinner, I will kick Sister Ann Daniels in the nuts (who knew?), and I will be forgiven all my sins if I don’t get diddled first.

You'd better hope that Sister Ann doesn't read this blog, 'cause there's gonna be a knock on your door . . .