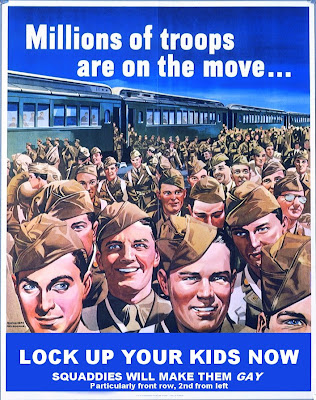 As a lifelong Republican who served in the Army in Germany, I believe it is critical that we review -- and overturn -- the ban on gay service in the military. I voted for "don't ask, don't tell." But much has changed since 1993.

My thinking shifted when I read that the military was firing translators because they are gay. According to the Government Accountability Office, more than 300 language experts have been fired under "don't ask, don't tell," including more than 50 who are fluent in Arabic. This when even Secretary of State Condoleezza Rice recently acknowledged the nation's "foreign language deficit" and how much our government needs Farsi and Arabic speakers. Is there a "straight" way to translate Arabic? Is there a "gay" Farsi? My God, we'd better start talking sense before it is too late. We need every able-bodied, smart patriot to help us win this war. ...

Military attitudes have also shifted. Fully three-quarters of 500 vets returning from Iraq and Afghanistan said in a December Zogby poll that they were comfortable interacting with gay people. Also last year, a Zogby poll showed that a majority of service members who knew a gay member in their unit said the person's presence had no negative impact on the unit or personal morale. Senior leaders such as retired Gen. John Shalikashvili and Lt. Gen. Daniel Christman, a former West Point superintendent, are calling for a second look.

Second, 24 nations, including 12 in Operation Enduring Freedom and nine in Operation Iraqi Freedom, permit open service. Despite controversy surrounding the policy change, it has had no negative impact on morale, cohesion, readiness or recruitment. Our allies did not display such acceptance back when we voted on "don't ask, don't tell," but we should consider their common-sense example.

Third, there are not enough troops to perform the required mission. The Army is "about broken," in the words of Colin Powell. The Army's chief of staff, Gen. Peter Schoomaker, told the House Armed Services Committee in December that "the active-duty Army of 507,000 will break unless the force is expanded by 7,000 more soldiers a year." To fill its needs, the Army is granting a record number of "moral waivers," allowing even felons to enlist. Yet we turn away patriotic gay and lesbian citizens.