Rudy Giuliani: Hypocrite Be Thy Name? 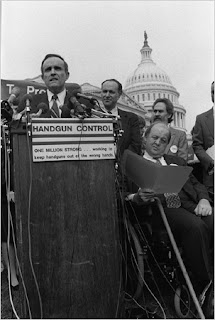 Allowing that times change and minds occasionally do too, hypocrite is a much overused word in the political lexicon.

But it is difficult to not tar presidential wannabe Rudy Giuliani with that label because of his mad dash from being a darling of gun control advocates to a suck-up to the anti-gun control crowd that dominates the Republican Party.

’s tough gun-control laws are a big reason that the Big Apple has gone from being a crime-ridden urban wasteland in the 1980s to a remarkably safe place with one of the lowest big-city murder rates, and Giuliani can take major responsibility for that happening because he tirelessly crusaded for gun control during his two terms as mayor from 1994-2001.

Trouble is, the man who once spoke out forcefully on handgun control at a Washington, D.C., rally (see photo) with Senator Charles Schumer and James Brady, who was shot in the assassination attempt on President Ronald Reagan, is playing to the lowest common Republican denominators in his long shot bid (in my view, anyway) to take over the White House.

Whereas Giuliani once advocated sweeping federal gun-control laws, he now says that should be up to the states.

I have nothing against personal possession of a limited number of firearms in one's castle (ie., a man's home is his castle), but too many states have pitifully weak firearm laws that pretty much allow people to buy and have as many guns as they want, as many kinds of guns as they want, and to pack heat just about anywhere they want.

Worst yet, Giuliani has gone weak in the knees over support of the most sensible of control-control legislation -- an assault weapons ban.