Have We Got a Blogstorm For You! 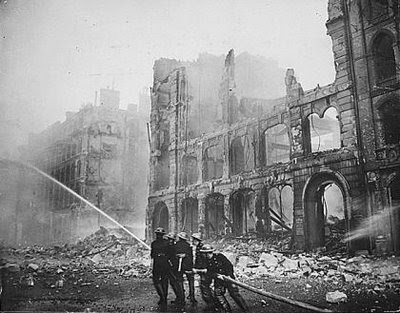 A newspaper is a boat, a highly evolved mechanism designed and built to float in water. Blogs are bikes, built to cruise in another environment. Now, you can pull a bunch of planking off a boat and add wheels and pedals, but that won't make it as light and maneuverable as a bike.
-- Terry McDermott, L.A. Times staff writer

An obedient child, I heeded my mother’s advice to never play with matches. Except for blowing up the mailbox of a customer on my rural paper route who wouldn't pay me, I stayed true to her admonition.

But a funny thing happens if you’re not careful when you grow up and become a blogger:

You get drawn into flame wars involving other bloggers with whom you may differ, and the online equivalent of playing with matches can get you burned.

Exhibit A in this regard is Ms. Ann Althouse, a law school professor and feminist when she is feeling set upon, which is fairly regularly. As a result, Ms. Ann Althouse's epynonymous blog is a kind of Magnetic North for flaming.

Boy did I ever learn that the hard way! Last year, I found myself in the eye of a growing blogstorm triggered by a post in which I had speculated in the course of a musing on presidential wannabe Mitt Romney as to whether he wore Mormon church-approved underwear.

I never found out whether he did, but as I noted in an essay that I wrote after I had recovered enough to be transferred from the ICU at my local hospital, this particular blogstorm reached a hurricane-force Category 5 because of the insistence of Ms. Ann Althouse to talk past me and then blow a fuse when I didn’t kiss her Ferragamos.

Eric Alterman refers to of what I speak in commenting on Ms. Ann Althouse's latest attack, this time on an unsuspecting Garance Franke-Ruta of The American Prospect and captured on video for posterity:

"A few months ago, Bob Wright asked me to do a BHTV [Bloggingheads TV] with Ms. Althouse. I knew nothing about her at all, except that she accused a female liberal blogger who met with Bill Clinton of having breasts . . . or something. I never could figure out what it was really. I said 'OK,' with the caveat that I wanted her to talk about why she, as a woman, thought it appropriate to call attention to the fact that another woman standing near Clinton happen to have breasts. I mean, my daughter will have breasts one day, and I want to be able to prepare her in case she needs to apologize for them. When Althouse emailed me to discuss potential topics, I said what I said to Bob, which was that we could talk about anything, as long as it included that topic. She got all huffy and pulled out of the discussion. Then she attacked me on her blog and again on the op-ed page of The New York Times. Here, she flips out -- is there any other word? -- with Garance when the latter merely refers to it. Garance is duly surprised by the hysteria -- as will you be if you watch it, I imagine -- but the fact is, she is getting crazy about the fact that she says Garance did not prepare the topic in advance. I tried to do that, and she flipped out as well."

Ms. Ann Althouse's response -- make that multiple responses -- are all over the map, but this one, oddly titled Things I'm Not Talking About, seems to sum up her feelings while showing a wee bit of contrition:

"Many characters in the leftosphere used the two-minute segment where I get mad to rake over the old flame war that I spent those two minutes saying I wouldn't be dragged into talking about again.

"I may be sorry I got as mad as I did -- but I think showing some anger in an argument is not a huge deal. There's so much repression and passive aggression out there. It's so easy to process your emotions with those grim tools. It's what we usually do. The notion that it's crazy to display emotion is. . . . crazy."

Inadvertent as it may be, Ms. Ann Althouse hits on why those leftobloggers can't help but return her compliments. (Hint: It's a two-word term with a total of 12 letters.)

My mother also taught me to let bygones be bygones, and like a chump I reached out a couple of times to Ms. Ann Althouse after my wounds had completely healed, one time to ask if she could point me in the direction of one of her legal eagle colleagues for comment on a tricky legal situation right in her own back yard. No response.

I did not sulk about this silent treatment and suppose that I should be flattered by the attention Ms. Ann Althhouse paid me in the first place. But then that would be like saying that it felt good to be run over by Mr. Dick Cheney's limousine.

MEANWHILE . . .
Death threats against a popular tech blogger have ignited an online debate about free speech, civility and sexism on the Internet.

The San Francisco Chronicle reports that:

"The threats against Kathy Sierra, an author who promotes the notion of emphasizing the needs of the user in Web site design, have sparked a Webwide debate on the nature of online discourse.

"The incident and its aftermath have drawn back the curtain on a computer culture in which the more outrageous the comment, the more attention it gets. It's a world that many women in particular see as still dominated by men and where personal attacks often are defended on grounds of free speech."

Holly in Cincinnati has a round-up of bad blog behavior at The Moderate Voice, which includes the aforementioned death threats, hate mail, making fun of people with cancer . . . you get the idea.