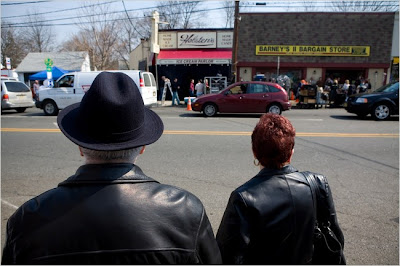 The President has addressed it. The Attorney General's an honorable man. He's a decent man. He should be given a chance to explain and everybody should sort of give him the benefit of the doubt and allow him to explain.

Alberto Gonzales has to go. I say this with no pleasure -- he's a decent and honorable man -- and without the slightest expectation that his departure will blunt the Democratic assault on the Bush administration over the firing of eight attorneys. In fact, it will probably inflame their blood lust, which is why the president might want to hang on to Gonzales at least through this crisis. That might be tactically wise. But in time, and the sooner the better, Gonzales must resign.

At the end of all this is the simple truth that Krauthammer understands -- this was not a battle that the administration needed, and it came at exactly the wrong time. The Department of Justice made matters exponentially worse by changing their stories and unnecessarily damaging the reputations of the attorneys involved. At some point, Gonzales has to have some responsibility for this foot-shooting escapade.

In 1973 the Senate voted to suspend funding for American military operations in ; the next year, Congress voted to cut off aid to the embattled government in . Some of today's commentators argue that those votes devastated the Democratic Party in the mid-1970s. But if so, the Democrats had a strange way of showing it. They won the 1974 midterm elections in a landslide. Two years later, Jimmy Carter grabbed the White House. To be sure, Watergate played a major role in those victories. But if the party's efforts to end the war weren't the primary reason for its success, they certainly didn't hurt.

For John Edwards, the illness [of wife Elizabeth] injects an element of uncertainty into his campaign. And that’s not a plus, because the last thing he needs right now – during this crucial phase, when activists are trying to decide who to work for, when donors are trying to decide where to send money – is the perception that he might not go the distance.

On the fund-raising front, Edwards is already lagging behind Clinton and Obama; it’s hard to see how the news about his spouse will help him close the gap. Democratic donors will undoubtedly sympathize with his personal challenges, but that won’t prevent them from making cold-eyed assessments about their own money. And given the front-loaded primary schedule, clustered around a slew of major states voting on Feb. 5, a candidate probably can’t survive without first having raised a great deal of money.

-- DICK POLMAN
News that Elizabeth Edwards' cancer has returned, this time in a "treatable but incurable" invasion of her bones and one lung, gave me pause yesterday, all the more because she and her husband John firmly rededicated themselves to his campaign for the White House.

I've never believed that John Edwards will be elected president in 2008, for the sad--probably shameful--reason that he's too substantive in his politics and too shiny in his appearance. Edwards' positions ring too sincere, too true, too deeply rooted in solutions. In politics, there's something off putting about that.

just a compliment on an informative summary - thanks for posting it