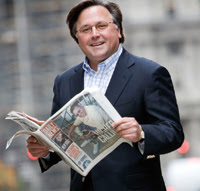 Newspapers are powerful. Or were. Many of the big guys — the LA Times, NY Times and the old Knight-Ridder newspapers — put people in charge who could not handle the power. That is the real problem here.

Can a slick public relations man with a controversial past, no publishing experience and a pocketful of big ideas rescue ’s two foundering daily newspapers?

My answer is “Who the hell knows?”

But nearly a year after a group of investors led by Brian Tierney purchased the Philadelphia Inquirer and Daily News after raising $150 million in equity, I am looking at that question in a new light and willing – in fact, desperate – to give him a chance of succeeding.

This is because the city’s two fine daily newspapers are dying slow deaths. They may not expire next month or next year (the News is the more vulnerable of the two), but both are toast without an enormous shot of adrenalin.

That is for two reasons:

* Aside from the people who still work there, ink-stained wretches like myself (who toiled at the Daily News for 21 mostly happy years) and nostalgia freaks, there isn't a lot of concern that these two community pillars have lost so many readers and are in such bad shape. People are too busy reading blogs, watching Fox News, getting the latest on their cell phones, or simply don't give a rat's ass about what's going on beyond who will be the next American Idol.

* While the media world has changed in dramatic ways outside of newsrooms, newspaper editors by and large have done a terrible job of adapting, let alone forcing change. And, as blogger Don Surber notes in the delicious quote atop this post, too often do a lousy job of exercising their considerable power.

The result in Philadelphia is that both the Inky and News, change averse cultures to their cores, have been painfully slow to fully embrace new media like the Internet, blogging, video and interactive do-dads that offer just about the only opportunity to win back readers and advertisers that they have lost and attract new ones.

* * * * *
Before we get back to Tierney, let's take a look at how these two newspapers got into such dire straits:

The Inky once covered the world with a savoire-faire that earned it 17 Pulitzer Prizes. The News won a couple of Pulitzers, as well, and made its mark by covering Philadelphia in a way that was so intimate and so street smart that editors from out-of-town papers flocked to its newsroom to try to understand -- and emulate -- why it had such a deep bond with its readers.

Although advertising revenues and readership were down and the new media was giving this old media fits as the old millennium gave way to the new, both papers made money. In the Inky's case, buckets and buckets of money. But this wasn't enough for a self-aggrandizing asshole by the name of Anthony "Tony" Ridder, chief executive of Knight Ridder, the newspaper chain that owned them.

Back in the day, Knight Ridder was the class of newspaper chains because of its commitment to excellence. Even in its waning years, KR's national and international reporters were putting out a great product, including stories on what was really going on in Iraq when The New York Times and other mighty mights were still drinking the White House Kool-Aid.

But at some point the balance between putting out that quality product and getting Knight Ridder's stock price up tipped in the direction of Wall Street. Ridder -- who more than earned my moniker as the Darth Vader of the newspaper industry -- was the tipper in chief.

Ridder eventually put KR on the auction block and the now considerably leaner Inky and anorexic News were rescued by the Tierney-led investment group. The papers would be locally owned for the first time in forever.

Tierney has cut way back on expenses, canned the Inky's lackluster editor and has demanded deep job cuts from already depleted newsrooms. A strike that would have further accelerated the papers' demise was narrowly averted when the Newspaper Guild blinked.

Tierney has not, as feared, messed with the editorial content of either paper, but otherwise has given anyone who cares about the papers' future a major case of heartburn.

It is not because of my personal experience with him as a News editor, which was entirely negative.

Tierney was a power in his own right as head of the region's largest public-relations agency, and his clients included the Roman Catholic Archdiocese of Philadelphia. The archdiocese believed that it was unaccountable, and whenever an article would appear that was even remotely negative, although accurate, Tierney would push back ferociously as the church's local junkyard dog.

No, I want him to succeed because he’s the only horse in this race and seems determined to shatter the cocoon in which the papers’ editors and reports have worked in for so long, something that I was unable to do as a mid-level editor who had diagnosed the disease and believed he had a cure.

As Jason Fagone writes in an article in the April issue of magazine, it may be only an outsider like Tierney who can fix what ails the papers:

“[He knew how far the papers lagged behind the ad industry’s best practices. He also knew that the Inky was too important to avoid. If you were buying media for a client, you couldn’t buy around the Inky. For Tierney, it was infuriating, because as America was becoming this paradisical place for entrepreneurs, an entrepreneur’s autobahn, there was this tanklike thing blocking the road, with thousands of guys like Tierney riding the clutch behind it, in their black Benzes, yelling stuff that would have made their grade-school nuns turn red — and what’s worse, the Inky acted like it knew it was this immovable tanklike thing, and didn’t care.”

As for the journalists themselves:

“The way they thought was so alien to Tierney. Most of them seemed happy to be semi-anonymous cogs in a big, important machine. . . . Journalists weren’t journalists anymore. They were brands. That’s what the of media was all about: bytes and brands. Tierney didn’t create the . He just lived there. And now that he, Brian Tierney, not some distant dysfunctional corporate overlord, had control and responsibility for these papers, he’d make sure his journalists learned to live in the , too.”

Tierney, who describes himself as more like Tony Soprano than Tony Ridder, wants to accomplish that by:

* Encouraging (but, he says, not forcing) reporters to take cameras with them to assignments and to blog, a dramatic redefinition of what reporting has long been all about.

* Introducing the Inquirer Express, a one-page capsule version of the day’s top stories. He has brought in Bill Marimow, an esteemed Pulitzer-winning former Inky reporter, to direct this and other initiatives.

* Dumping the papers’ job-search ad partner in favor of the considerably hipper Monster.com.

Fagone does not hide his enthusiasm for Tierney’s ideas, which he says “strike me as creative, economically sensible, coherent, ambitious . . . ”

I agree, although I am concerned that Tierney has not moved quickly enough to stanch the bleeding.

In any event, years of slashing and burning by Ridder and his crowd at the corporate level and change-resistant management at the local level will make it exceedingly difficult to return these two great newspapers to their former glory by reinventing themselves while not forgetting what made them great to begin with, and that simply is the only way they can succeed.


Even the return of Marimow may be problematic. As Fagnone notes, he’s “an Old World Guy trying to do a job with a allocation of resources.”

But if Brian Tierney’s Philadelphia Experiment is to succeed, that will have to happen.