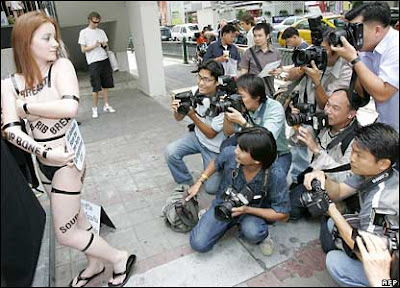 A PETA activist at a pro-vegetarianism rally in Bangkok

The media’s unrelenting fascination with and gleeful debasement of female celebrities whom they’ve deemed “bad girls” is at an all-time high. As for “bad boy” behavior? It’s understandable and allowable…even laudable. Nothing short of truly bizarre behavior, a la Tom Cruise or Michael Richards, will garner anything remotely like the harsh treatment that befalls female celebrities for behaviors that should, in some cases, draw compassion rather than moralizing judgment.

People get that. People understand why that is inherently wrong.

forces have released a senior aide to Shiite cleric Moqtada Al-Sadr on the orders of Prime Minister Nuri Al-Maliki . . . Ahmed Shibani, who had been held for more than two years, is a senior aide to Sadr, a radical anti-American cleric who is also the leader of the Mahdi Army militia, which Washington recently called the greatest threat to security in Iraq.

I'm not advocating that artists and record companies give all their product away for free. I recognize that there are legitimate IP/copyright concerns. The point is simply that the industry has spent the last decade or so focused on trying to maintain their old marketing/distribution models instead of recognizing the new reality and figuring out how to exploit it. That may, in fact, involve giving away lots of content for free. Or maybe not. But radio stations have been giving away content for free for decades, sometimes after large checks were written to them by record companies.

The point is that the internet and .mp3s are here, they aren't going away, and instead of fighting it record companies need to figure out how to creatively exploit that to, yes, hopefully make lots of money.

Sometimes I wish I was a terrorist. I do. Sometimes I want to kidnap somebody and chop off his head with a spoon. Can't name names. Wouldn't be prudent.

And I don't mean random violence and death to innocents. Hell no. No bombs in wedding parties, pizza parlors or supermarkets. No suicide belts or indiscriminate carnage. No wanton murder. No slaughter of women and children. No massacres of "military age" (which means ten years and above) 'men' and let god sort it out.

No, I mean the capture and torture of a precisely targeted evildoer of unassailable credentials with curriculum vitae of bona fide crimes against humanity and a sash full of 'heart of darkness' merit badges. Someone specific. Someone guilty, but above the law. Someone deserving of the most cruel torture and uninterrupted suffering.

My only regret is there are so many of them and so few of me.

[I]n our world of celebrity sound bites and media saturation, talk, not reality, is what counts. Multimillionaires lecture us about fairness, while sinners rail about sin. In politics, hundreds of millions of dollars are spent each election year on campaigning. Image-makers, pollsters and media advisers shape every election. Fluffy candidates are removed enough from the electorate that the old idea that their own actions should match their rhetoric is seen as hopelessly old-fashioned.

I recently bought a compact fluorescent bulb, the GE brand recommended by Instapundit. I hate it. It flickers constantly. When it's not flickering it fills the room with a depressive, dulling haze. Maybe this is what happened to Courtney Love! It gives me a headache to look at it. ... I've consoled myself with the thought that I'll replace it with a regular bulb when it burns out. Then I realized it won't burn out for five years. I'm replacing it tomorrow. If John Edwards can be live in a 28,000 square-foot mansion, I can have a 100-watt bulb. Populism!

And V.D. Hanson actually thinks he ISN'T a "media advisor" or "image maker." Sorry, but that's WAY too funny.

Yes, I found his comments to be exceedingly rich. He really is a horses's backside of the first water.

My concern is that all fluorescents including the compact ones contain mercury to work.

That is a very dangerous neurotoxin to be releasing into the environment.