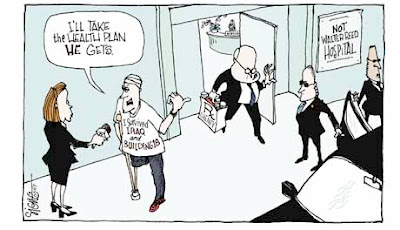 The scandal over the shabby treatment of America's returning war wounded and veterans is getting uglier by the day.

The Blotter reports that a proposal to keep seriously wounded veterans from falling through the cracks of the bureaucracy was shelved in 2005 when Jim Nicholson took over as the secretary of the Veterans Affairs Department.

As a result, seriously wounded veterans continue to face long delays for health care and benefit payments after being discharged from the military.

The program, called the Contingency Tracking System, had been approved by Nicholson's predecessor but died once Nicholson took over the VA, former VA program manager Paul Sullivan told ABC News.

Sullivan said he was told the cost of the system -- less than $1 million to build and requiring a handful of staff to maintain -- was prohibitive.


Cartoon by Signe Wilkinson/Philadelphia Daily News
Posted by Shaun Mullen at 5:47 AM
Email ThisBlogThis!Share to TwitterShare to FacebookShare to Pinterest