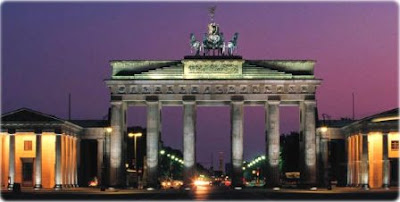 The summer arrived late all those months ago, but it has lingered longer than we were entitled to expect. There has been no rain of any consequence since early December, and the lovely long warm windless days have been a joy to behold. Today, though, the clouds have rolled over and heavy wind is promised so very soon the leaves will begin to change colour. The drinking water tasted foul at the height of the summer, evidently because there was some sort of non-lethal algal infestation at the water plant, but it’s all right again now and it’s safe to add it to one’s whisky again.

The big news story from here is that my wife and I will be visiting in late August. For at least 40 years many German cities have funded a programme for bringing back their former citizens to reassure them that the reasons for their forced departure have gone away. This news did not reach me until about three months ago, and as you can well imagine certain elements in our family argued very persuasively that a chap ought to take advantage of such an offer — if one could be arranged — and go. This was not without some truth, but you will not find it hard to imagine that the idea contains some problems too. But eventually I sent off an email to the city government to “register an interest” in taking part in their programme. I was in the shower a couple of nights later when Sonia dashed in to tell me there was a phone call from Berlin, and I dripped all over the carpet while the very nice man from the Berlin Senat interviewed me. He went so far as to offer us a place in the August touring group, pausing only to make whimsical comments about their advancing age and infirmity, and how he can always tell who has come from Australia because they’re the ones looking completely shagged from the jet lag.

I took a few days to think all this over some more, but finally the reasons to accept are compelling. The Berlin visit provides opportunities to travel more widely in Germany and visit the ancestral provinces, making contact with the people still there who knew my parents — if any survive — and try to get to understand what makes modern Germany tick. I’ve spoken to people who have been back, and they are convinced that the ugly history of 65 years ago has truly become that — history. (And the idea of two or three weeks in the northern summer while the Wairarapa freezes in August is almost irresistible.) Anyway, we’ve bought maps and a memory expansion for my camera, so you can see that there’s a commitment of sorts developing quite quickly.

Speaking of things German, I bought a German-made water blaster some 5 or 6 years ago, while we still lived in . Since then it has failed twice, and I soon talked myself into the belief that this simply wasn’t good enough. I put a proposition to the local Kärcher dealer that the warehouse should simply replace the faulty parts with new ones, the theory being that mine was likely to be only one of many going wrong, and that the engineering would have been improved in the meanwhile. The dealer assured me that I wasn’t the first to complain, but they had found the local representative of the manufacturer uncooperative to say the least. So I prised the name and email address of the chief executive out of him and wrote her one of my famous customer complaint letters.

There was a long silence while I watched the beautiful water-blasting weather a-wasting, and then one day a courier arrived at my door with the brand-new components I had asked for. But I doubt I’ll get away with it a second time if everything goes pear-shaped again.

We went to the Showgrounds the other weekend to visit (for the first time since moving to the country) the local Agricultural and Pastoral Show 2007. A & P Shows have fallen into disrepair in many places in recent years, including here, but there are still towns where Show Day is a public holiday. I don’t get all that excited about watching husky men and girls chopping logs with axes that would take off their legs if they slipped a millimetre, but we were amused to see a display by a government agency called Working For Families. They’re one of the welfare outfits, and their services didn’t seem to be much in demand. Maybe it was the late model Mercedes parked outside their stall that dampened their clients’ expectations, but I thought I’d encourage the workers and called to one of the bored functionaries standing around outside, “I see you’re getting results!” I learned then what a “thin smile” looks like.

The long, hot summer has had one very undesirable side-effect. It produced an explosion in the numbers of very hoary old men with knobbly knees wearing shorts and sandals, usually topped by a Hawaiian shirt. Matters of good taste dictate that there arrives a time when a chap ought to cover up, and this doubly true when the perpetrator of the style crime has acquired suntanned legs. I mean, really!

Last Saturday evening I was sitting watching the TV news and minding my own business, when with the suddenness and speed of a barroom door opening I developed a sore throat. By it had progressed to a full-blown cold and until yesterday I was slowly ground to bits under the millstones of streaming eyes and nose, hacking cough and thick head. I wouldn’t normally record anything so banal, but this cold was so violent it shook me to the core. Here we are four days later and it’s practically all gone, but this sniffle will live in a chap’s memory.

And now the rain has arrived, and the temperature has chilled. It will soon be time to get the lawnmower out again. Sigh!

* * * * *
Country Bumpkin is a bibliophile and man of the world who lives in New Zealand. Among his other guest blogs are Country Polikarpovs, Country History, The Country Way of All Flesh, Country Images, Country Winter and Country Ice.