'Will I Make It Home to My Family Today?' 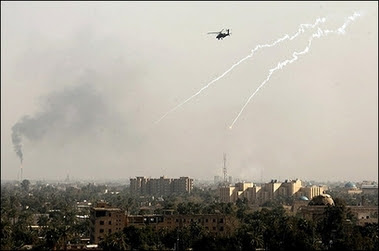 Last night I didn’t get a good night’s sleep. There were loud sirens sounding close by until dawn. I woke my son at 06:30 to get ready for school. At seven he left to wait for the minibus on the corner and I left for work.

As I reached the main road of our neighborhood I saw army men gesturing to me to go back. Being me, I had to test the system; so I went a few meters forward and stopped. One came running at me, "Go back, the street is closed to cars and even to pedestrians; there are American forces searching down there." After a few minutes of persuasion, he told me there was a dirt track that was open for emergencies but I had to be searched; so I took it then sped down the highway to work feeling rather pleased with myself.

As drove along I was thinking, "Oh, this is unusual; there are no traffic jams, no check stops. I’m going to reach work very early." It usually takes two hours to drive less than three miles to work.

Then the shooting began.

From both sides of the highway, I could hear gunfire . . . coming at me!

Then I realized they were shooting at one another and I was caught in the crossfire.

So that's why the highway is clear. Furtively looking around,I saw a police patrol under the bridge and a policeman gesturing madly to me to hurry. I sped to the relative safety of the column under the bridge, and stopped, heart pounding. Will I make it safely home to my family today? Or am I going to be just one more statistic, one more "unidentified body" for my colleagues to include in the roundup of violence for the day, we daren’t carry IDs lest they be used against our families.

I witnessed the fighting; it was all around me, the army vehicles shooting into the orchard, the shooting back, not more than thirty meters away from where I stood; bullets flying everywhere.

I visualized my daughter’s life without me, the hardship of having no real home; and my son, still twelve, after having lost his father and older brother, to lose his mum, too, at this age would unbalance him forever.


Please God, spare me . . . At that moment I realized why so many Iraqis were willing to lead a deprived existence in Jordan, Syria, or anywhere away from this hell on earth; I realized, too, that I had been too quick to judge them.

I walked into the office at ten, said I was sorry for being tardy – and that’s all; my very real brush with death is nothing fascinating, it’s everyday news; it was just me this time.