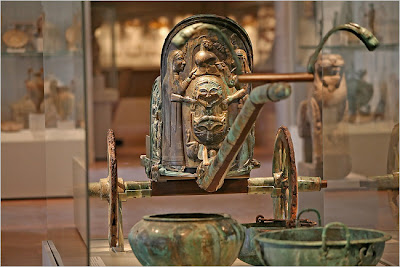 Your chariot is ready. More here.

The has lost its position as the world's primary engine of technology innovation, according to a report by the World Economic Forum.

The is now ranked seventh in the body's league table measuring the impact of technology on the development of nations.

A deterioration of the political and regulatory environment in the prompted the fall, the report said.

The top spot went for the first time to , followed by .

-- BBC
What the leftist and media critics get wrong about Rumsfeld, Cheney and Bush is that they screwed up by going in halfhearted and without demanding real sacrifice upfront from the American people.

We must keep talking to the Iranians, offering carrots even when these are contemptuously tossed into the gutter, because there is no credible alternative. Even threats of economic sanctions must be considered cautiously. Their most likely consequence would be to feed Iranian paranoia, to strengthen the hand of Tehran’s extremists. A state of declared Western encirclement could suit President Ahmadinejad very well indeed.

No sensible Westerner, committed to the pursuit of international harmony, could welcome any of this. Iran represents a menace to the security of us all, not to mention what it must be like to live under that reprehensible regime. But, in the wake of the Iraq catastrophe, never has the overwhelming military power of the United States seemed less relevant to confronting a large, relatively rich nation that enjoys considerable grassroots support in the Islamic world for its defiance of the West.

Does everyone in the Bush administration have amnesia?

In recent times US grand strategy has been guided by a new kind of doctrine, named after not its author but its exemplar: the Costanza Doctrine.

This doctrine, which had its heyday in 2002-2004 but remains influential, recalls the classic episode of the TV comedy Seinfeld, "The Opposite," in which George Costanza temporarily improves his fortunes by rejecting all the principles according to which he has lived his life and doing the opposite of what his training indicates he should do. As Jerry tells him: "If every instinct you have is wrong, then the opposite would have to be right."

Lapses in using a digital medical record system for tracking wounded soldiers have led to medical mistakes and delays in care, and have kept thousands of injured troops from getting benefits, according to former defense and military medical officials.


My fiance will kill me, but I urge everyone to vote foir Sanjaya in American Idol. It's very, very important to subvert this compulsive but far too self-important show. Help can be found here.

Photograph by Nicole Bengiveno/The New York Times
Posted by Shaun Mullen at 5:30 AM
Email ThisBlogThis!Share to TwitterShare to FacebookShare to Pinterest