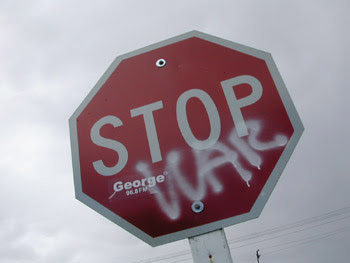 There's an old children's song that includes the lyrics 'round and 'round the mulberry bush the monkey chased the weasel.

Well, Congress is the monkey and the Iraq war is the weasel.

After tying itself in non-binding knots, the House Democratic leadership today rolled out a bill under which President Bush would be required to certify on July 1 and again on October 1 whether the Iraq government is meeting key benchmarks in reducing violence and other areas.

If Bush certifies that the Iraqis are meeting the benchmarks, then withdrawal would begin on March 1, 2008, and be completed by September 1, 2008.

Bottom line: Withdrawal would begin at the end of this year and the earliest and by September 2008 at the latest.

The ink was barely dry on the bill when House Republican Leader John Boehner attacked it, saying that the Dems were proposing legislation that amounted to ''establishing and telegraphing to our enemy a timetable'' that would result in failure of the U.S. military mission in Iraq.

At first blush, the Democratic plan makes sense because it puts the burden where it belongs, while Boehner's rejoinder is predictable -- and idiotic.

The key will be whether the Dems can keep their caucus together and get enough Republican support. Then there's the hapless Senate, which hasn't even been able to do anything non-binding.

In any event, stay tuned. Meanwhile, more here.
Posted by Shaun Mullen at 5:50 AM
Email ThisBlogThis!Share to TwitterShare to FacebookShare to Pinterest