David Hicks & The Stench of Hypocrisy 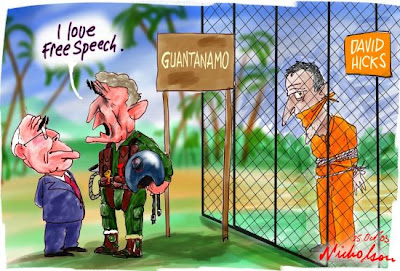 Word comes from Australia that under the plea bargain struck by lawyers for convicted Al Qaeda supporter David Hicks, he will soon be transferred from Guantánamo Bay to Australia and after serving an nine-sentence will be freed from an Adelaide jail on New Year's Day.


The stench of hypocrisy emanating from the White House and Canberra on this one is overwhelming.

Unlike his fellow “enemy combatants” at the flagship of the Rumsfeld Gulag, where he received a recommended seven-year sentence (down from a threatened life sentence), Hicks soon will be free for two reasons:

First, because he is a caucasian from a country that has slavishly supported the U.S. in Iraq and the so-called War on Terror’ lengthy incarceration.

Second and most importantly, his lengthy incarceration without trial and questions about his treatment had become a political liability for the Conservative government of Prime Minister John Howard.

In agreeing to the sweetheart deal, Hicks stipulated he had "never been illegally treated" while in U.S. custody, although his father said his son would say anything just to get out of Gitmo.

"It's a real shame David had to go through this way to get released. The Americans made David sign a paper to say he was never abused . . . when we knew he has been -- David told us."

Posted by Shaun Mullen at 11:52 AM
Email ThisBlogThis!Share to TwitterShare to FacebookShare to Pinterest

I'd like to remind you that you are free to post your rubish because an American member of the Armed Forces is protecting your right to be free. And, by the way, you are an idiot.