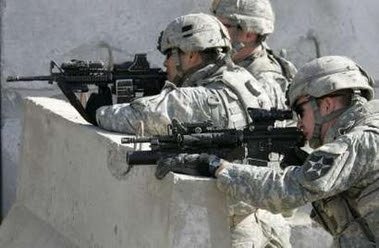 What, then, is the biggest problem? How the Americans can infuse into the Iraqi army and police in a sense of mission and even-handedness such that the Americans can withdraw from neighborhoods in eight to twelve months without backsliding.

Existing American military tactics and techniques are adequate to staunch the ethnic cleansing; to transfer those conops or to design substitute techniques that the Iraqi army and police can use – and to meld the army and police into a unity of effort – is a far more problematic task. On the other hand, I’ve seen enough examples of tough Iraqi leadership at the battalion and police chief level to believe that some leadership is emerging. Right now, though, the glue is the presence of the American troops. They have to be out on the streets first, then the Iraqi forces fall in behind them.

The places in where I saw clean streets, open shops, and guards on every corner were the Shiite areas. It’s too early to tell whether we’re dealing with a rope-a-dope feint by the Shiite politicians. It is in their short-term interests for them to help us purge bad elements, and restore order and services. But whether they believe a compromise with the Sunnis is possible or necessary – who knows?

[A] final near-certainty, which is in some ways the hardest for politicians to admit, is that America is losing or has already lost the Iraq war. The United States is the strongest nation in the history of the world and does not think of itself as coming in second in two-way contests. When it does so, it is slow to accept that it has been beaten. American political and military leaders were reluctant to acknowledge or utter that they had miscalculated and wasted tens of thousands of lives in Vietnam, many of them after failure and withdrawal were assured. Even today, American politicians tend not to describe Vietnam as a straightforward defeat. Something similar is happening in Iraq, where the most that leaders typically say is that we "risk" losing and must not do so.

Democrats avoid the truth about the tragedy in Iraq for fear of being labeled unpatriotic or unsupportive of the troops. Republicans avoid it for fear of being blamed for the disaster or losing defense and patriotism as cards to play against Democrats. Politicians on both sides believe that acknowledging the unpleasant truth will weaken them and undermine those still attempting to persevere on our behalf. But nations and individuals do not grow weaker by confronting the truth. They grow weaker by avoiding it and coming to believe their own evasions.

Americans' mood about the conflict hasn't improved since Mr. Bush announced his new policy of sending another 21,500 troops to improve security in and the rest of the country. Just 20% of respondents [to a Wall Street Journal/NBC News poll] characterize themselves as "more confident" the war will conclude successfully, while 69% say "less confident"; that's essentially unchanged since January.

Nor are Americans feeling positive about the war against al Qaeda and the Taliban in . Just 28% say that conflict is going well, while 69% say it isn't.

Among the poll's more striking findings is the high level of public interest fully 20 months before Election Day. About three in four Americans say they are following the campaign "fairly" or "very" closely; that's not far below the proportion that reported paying close attention to the president race in October 2000 -- one month before the election.


Real-life human needs have never been a priority of this administration. The evidence is everywhere — from the mind-bending encounter with the apocalypse in Baghdad, to the ruined residential neighborhoods in New Orleans, to the anxious families in homes across America who are offering tearful goodbyes to loved ones heading off to yet another pointless tour in Iraq.

The trial and conviction of Scooter Libby opened the window wide on the twisted values and priorities of the hawkish operation in the vice president’s office. No worry about the troops there. And President Bush has always given the impression that he is more interested in riding his bicycle at the ranch in Texas than in taking care of his life and death responsibilities around the world. That whistling sound you hear is the wind blowing across the emptiness of the administration’s moral landscape.
-- JURRASICPORK