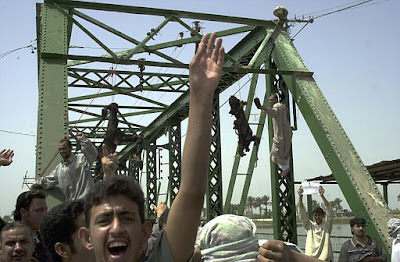 2004: Murdered civilian contractors hang from a bridge in Fallujah
Did you know that there are almost as many civilian contractors (120,000) in as troops (130,000)? And that 800 have been killed and more than 3,300 hurt doing jobs normally handled by a military stretched to the breaking point because of the Bush administration's wretched management of the war?

Most of these civilians work for mega-firms like Halliburton and Wackenhut. They cook meals, do laundry, deliver supplies and work on construction projects and make infrastructure repairs.

A smaller number work for private security companies like Blackwater USA, which touts itself as "The most comprehensive professional military, law enforcement, security, peacekeeping and stability operations company in the world" with a mission "To support security, peace, freedom, and democracy everywhere."

Translation: Many of Blackwater's employees are mercenaries, including former Army Special Forces troopers and Navy SEALS who get paid $150,000 a year to guard prisoners, protect convoys, stand sentry and do security overflights in .

With rare exceptions such as the shoot down of a Blackwater helicopter in in January that killed five and the murder of four Blackwater employees by a mob in Falllujah in 2004, civilian casualties get no publicity. That’s just fine with the Pentagon.

This is because the more attention is paid to civilians and the huge salaries that they pull down, the more questions are raised about the tens of billions of dollars in no-bid contracts awarded to profiteers like Halliburton who have incestuous ties to the Bush administration. Dick Cheney, of course, ran Halliburton before becoming vice president, and it is no coincidence that the company’s stock has tripled since the outset of the war.

There is a second reason as well: By and large Americans are uncomfortable with the notion of hired guns doing their military’s dirty work.

This brings us to the sad story of the widows of the four men -- independent contractors working for Blackwater -- who were separated from the convoy they were escorting and infamously killed by a mob in Fallujah and their bodies hung from the trestles of a bridge.

Their husbands' estates are suing Blackwater for wrongful death and fraud. They claim that Blackwater failed to provide the armored vehicles, equipment, personnel, weapons, maps and necessary lead time in which the four men could have familiarized themselves with the area.

For its part, Blackwater asserts that state law (in this case North Carolina, where it is headquartered) is trumped by federal law and that no court of any kind has jurisdiction to review the claims. The case has bumped all the way up to the Supreme Court, which apparently will rule on the jurisdictional question.

It is easy to feel sorry for the widows, but hard to rationalize blaming Blackwater for the deaths.

Where did the men think they were going? Disney World?

Not to sound like a hard heart, but it also is difficult to feel a whole lot of sympathy for civilians who have come back from Iraq with big bucks in their pockets but with cases of Post Traumatic Stress Disorder and other maladies that their health-insurance plans won't cover.

War is indeed hell. Members of the armed forces deserve the best care (even if, as we know, they sometimes don't get it) and their kin compensation and other support if they are killed.

But no one is forcing civilians to go to , nor should they have special privileges just because they happen to work for Halliburton or Blackwater, let alone special compensation if they return home screwed up physically or mentally.

THE SECRET LIFE OF HERB KIRK
Don't think for a moment that the military has only recently used civilian contractors to help do its dirty work -- and sometimes in highly irregular ways.

Years ago, I became familiar with the case of Herbert G. Kirk, a master sergeant and radar specialist who was quietly mustered out of the Air Force during the Vietnam War.

Kirk traded in his Air Force blues for civilian mufti as an employee of Lockheed. He had made the switch so that he could supervise a secret radar station on a mountainside in that helped guide B-52 bombers to targets in and . The station was overrun by guerrillas and Kirk was killed.

A mere annoyance for the Pentagon, as opposed to the embarrassment they would have faced had it been revealed that an Air Force NCO was running a secret combat installation in a country with which the U.S. was not at war.

Kirk’s family, which was merely told that he had died in , smelled a rat and enlisted the help of their congressman, who after years finally got the Air Force to admit what they had put Kirk up to. As a result, the family got the compensation it deserved, as well as some closure.

In addition, Kirk’s name was appropriately if belatedly added to the wall at the Vietnam Veterans Memorial in

I am a 2 tour Vietnam Veteran who recently retired after 36 years of working in the Defense Industrial Complex on many of the weapons systems being used by our forces as we speak.

We have bought into the Military Industrial Complex (MIC). If you would like to read how this happens please see:

Through a combination of public apathy and threats by the MIC we have let the SYSTEM get too large. It is now a SYSTEMIC problem and the SYSTEM is out of control. Government and industry are merging and that is very dangerous.

There is no conspiracy. The SYSTEM has gotten so big that those who make it up and run it day to day in industry and government simply are perpetuating their existance.

The politicians rely on them for details and recommendations because they cannot possibly grasp the nuances of the environment and the BIG SYSTEM.

So, the system has to go bust and then be re-scaled, fixed and re-designed to run efficiently and prudently, just like any other big machine that runs poorly or becomes obsolete or dangerous.

This situation will right itself through trauma. I see a government ENRON on the horizon, with an associated house cleaning.

The next president will come and go along with his appointees and politicos. The event to watch is the collapse of the MIC.