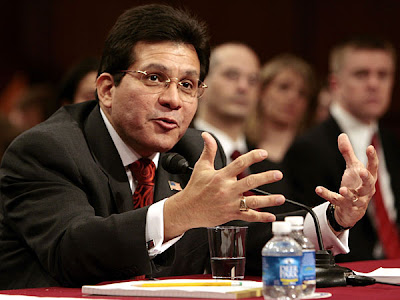 I have argued that Attorney General Alberto Gonzalez, who has turned the Justice Department into an arm of the Republican National Committee, will not be fired or asked to resign even after the latest scandal on his watch – the sacking of U.S. attorneys because they were not Republican enough.

My reasoning is simple: Gonzalez has been an obedient lap dog of George Bush, whether it is using junk law (as opposed to junk science) to defend the overreaching of this imperial presidency, or to tie investigators in knots as they pursue White House documents.

But I have failed to account for one rather large thing – Gonzalez’s peerless record of lying to Congress. Or in words that Scooter Libby understands, perjuring himself and obstructing justice.

Far be it from me to put congressfolk on a pedestal, but the fact of the matter is, they just don’t like being lied to, especially when it is the No. 1 lawman in the land. The AG’s claim that he never intended to cut them out of the U.S. attorney approval process has been shown to be yet another lie, albeit a whopper of one since Justice had a well-oiled plan in place to do just that.

So I am now taking more seriously talk that Gonzalez may want to “spend more time with his family” or “pursue other interests.”

In a nifty pairing of big stories, Tom Maguire asks over at Instapundit: Will Gonzaga outlast Gonzalez?