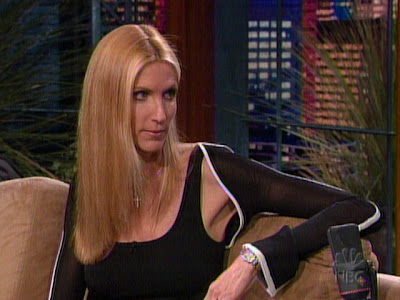 A memo from the editors of the DeKalb (Illinois) Chronicle to their readers over L'Affaire Coulter:

The rapid escalation of electronic communication options and the frequent inappropriate and indiscriminate use of those options have combined to produce horror stories regarding job terminations that we have all heard about and shaken our heads over. We all know stories of folks getting fired via e-mail or through a voice-mail message left on a home or cell phone answering machine. We can't fathom the gutless and impersonal nature of such terminations. We can't fathom it -- yet we're about to do one better. We're going to fire someone publicly -- in print -- right here, right now . . .

Ann Coulter is not a "real" employee of the Chronicle. She isn't a freelancer or even an independent contractor. If she were an employee and referred to another human being as a "faggot," her employment would be short-lived. As it is, the acerbic Coulter is a syndicated columnist whose material is distributed through Universal Press Syndicate. Universal President and Editor Lee Salem has responded to Coulter's remarks by saying, “She is not an employee, and we have no legal power to "fire her."

That's a lot like the Chronicle saying, "She didn't say it in one of the columns we ran, so it isn't our problem." Wrong. It is our problem, and not dealing with it is a cop-out.

So yesterday we called Universal Press Syndicate and "fired" Coulter. What she said was wrong and hurtful and stepped way beyond the line of human decency, much less political commentary.

Hat tip to The Horse's Mouth