Quotes on Yet Another War Anniversary 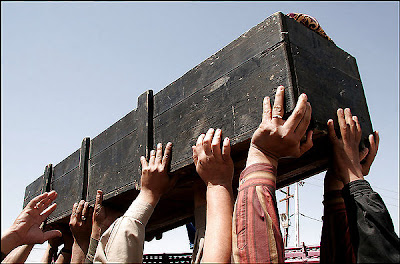 Mourners carry the coffin of a car-bombing victim in Najaf

I want to stress that this operation is still in the early stages. . . . The new strategy will need more time to take effect. And there will be good days, and there will be bad days," he said. "Four years after this war began, the fight is difficult, but it can be won. It will be won if we have the courage and resolve to see it through.

It seems to me that the old cliché, "Those who do not remember history are doomed to repeat it" applies much more to ordinary citizens than to politicians.

In fact, politicians count on that truism. How many people actually know how started? How many people further know how our involvement in accelerated? How about when the draft was implemented?

And how many know the details of the Weimar Republic, the Reichstag, the supposed "election" of Adolph Hitler, the purported attack by Poland on a German radio station that was, in fact, a falsehood from beginning to end?

The fact that we are, collectively, so very uneducated about humanity's own recent history, is what the right wing counts on when they send out the attack dogs to decry any comparison between Iraq and Vietnam -- and possibly what the Democrats now dragging their feet on the Iraq Quagmire count on as they tell us every day, "Wait, wait, give us more time . . . "

Four years in and the only way out and out now would be to quit. Capitulation is not a policy. It is merely procrastination. There is a way out, but it is years away and many people, people who swoon easily in the light sun of this war lite, do not have the ability to endure war; even so tepid a war as this. They do not have the simple patience.

It is in patience alone that our enemies outstrip us. After all, when you look at what they have made of their "civilization" what indeed do they have to lose?

Four years in and what do we have to lose should we be forced to lose?

A few weeks before the war in Iraq began in 2003, I was overtaken by fear. I did not fear the war but that George W. Bush might change his mind about overthrowing the Iraqi regime. I was sad to see antiwar protesters in the streets of Washington and London. "What do they know of our sufferings?" I said. . . .

The war has united Iraqis in their disappointment. I ask myself if our expectations were too high. It is hard to answer. But I look back and realize that the fears that I had four years ago were misplaced: If Bush had changed his mind about the war, things might be better now.

Most Iraqis believe life is better for them now than it was under Saddam Hussein, according to a British opinion poll . . .

The survey of more than 5,000 Iraqis found the majority optimistic despite their suffering in sectarian violence since the American-led invasion four years ago this week.

One in four Iraqis has had a family member murdered, says the poll by Opinion Research Business. In , the capital, one in four has had a relative kidnapped and one in three said members of their family had fled abroad. But when asked whether they preferred life under Saddam, the dictator who was executed last December, or under Nouri al-Maliki, the prime minister, most replied that things were better for them today.

Only 27% think there is a civil war in , compared with 61% who do not, according to the survey carried out last month.

It's hard to describe the noise when a whole cabinet of crockery is emptied on to the floor. Even harder not to shout in indignation when the American soldier who intentionally tipped it forward, until the plates and dishes slid smashing to the floor, says without regret, "Whoops!" and crunches over the shards past the distraught owner. "Cordon and search" they call looking for Sunni insurgents and their arms and explosives. But at what cost to the battle for "hearts and minds"?

Four years after the invasion of , the high and growing demand for troops there and in has left ground forces in the short of the training, personnel and equipment that would be vital to fight a major ground conflict elsewhere, senior military and government officials acknowledge.

More troubling, the officials say, is that it will take years for the Army and Marine Corps to recover from what some officials privately have called a “death spiral,” in which the ever more rapid pace of war-zone rotations has consumed 40 percent of their total gear, wearied troops and left no time to train to fight anything other than the insurgencies now at hand.

The risk to the nation is serious and deepening, senior officers warn, because the military now lacks a large strategic reserve of ground troops ready to respond quickly and decisively to potential foreign crises…. An immediate concern is that critical Army overseas equipment stocks for use in another conflict have been depleted by the recent troop increases in , they said.

The Baghdad Security Plan is now over one month old since its official announcement on February 14. While it is impossible to judge progress over the course of one month in a complex battlespace such as , the initial signs are encouraging. Sectarian murders, the fuel for the potential Sunni - Shia civil war, have been dramatically reduced. Before the beginning of the operation, Scores of bodies were found executed daily, now the number is in the single digits. Massive car bomb attacks, which in the past have killed dozens and wounded hundreds, have been reduced.

There are some things in life that are perennials, and for good (and happy) reasons, like watching the "Charlie Brown Christmas Special" with my kids, just like my parents watched it with me. This, on the other hand, is a blog post that I wrote on , in the very first month of Attytood.

Sadly, it is becoming a perennial -- I reposted it last year on this date, and now I am reposting it again. It was called "Anniversary of a Lie," and it shows the deliberate misinformation that not only clouded the run-up to war but its very first hours. Since I wrote this on , about 2,000 more American troops and countless Iraqi civilians have died, in a war that started with a lie and won't end until people begin to confront the truth.

I hope and pray that I never have to post this again.

Posted by Shaun Mullen at 4:43 AM
Email ThisBlogThis!Share to TwitterShare to FacebookShare to Pinterest