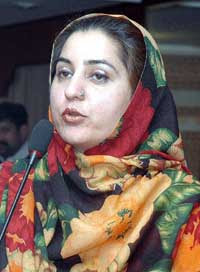 At the top of my list of political pet peeves is the seeming inability of many liberals to speak out forcefully against the Islamic jihad. You know, the folks who fly jetliners into high-profile targets to kill you, me and our children.

A close second is the seeming inability of many feminists to speak out forcefully over the plight of Arab women, who happen to include the mothers, sisters and daughters of those jihadists.

A good example of the latter is the muted reaction to the assassination of Zilla Huma Usman (see photo), the social welfare minister for Punjab Province in Pakistan, was who killed because she was not wearing a head scarf in public.

As Donna Baver Rovito notes, the Usman killing was not on the radar of the National Organization for Women, which had nary a peep about it at its website, but did cogitate on the weighty matter of whether the popular "Desperate Housewives" TV series misleads viewers about teen contraception. (Of course it does. It's TV, for crying out loud!)

Rovito, a women's rights advocate, notes in a Philadelphia Daily News op-ed piece that NOW also has missed the boat on the saga of Ayaan Hirsi Ali, the Somali-born author who has fled to the U.S. from Holland, whom Michael van der Galien has blogged about here.


"There isn’t a single entry about Ayaan Hirsi Ali on the NOW Web site. (But there is a helpful video about 'how advertising effects women’s body image, health and self-esteem.')

"There isn’t a single book about Islamic gender apartheid among the 48 books on the NOW Web site. There are, however, six books bashing George Bush, a book attacking Mormon treatment of women and others advocating gay marriage - but nothing about forced marriages, honor killings, rapes, beatings or other forms of oppression suffered by Muslim women."

Perhaps Rovito is being a bit unfair to NOW, and some of her more general comments about U.S. society are a bit over the top.

But in the instances of Usman and Ali, this leading women's group certainly seems to be playing to form -- as well as my second biggest political pet peeve.

Hat tip to Will Bunch at Attytood
Posted by Shaun Mullen at 9:00 AM
Email ThisBlogThis!Share to TwitterShare to FacebookShare to Pinterest