Is the Surge Working? You Must Be Joking. 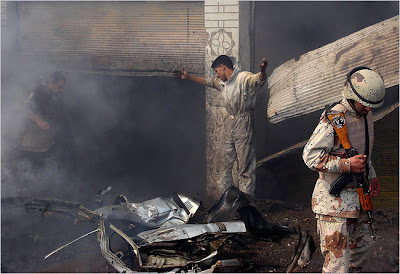 Well, it has been an awful week for both objectives:

In the northern city of Tal Afar, a bombing in a Shiite neighborhood by Sunnis killed 70 people and a reprisal massacre of Sunnis by Shiite police officers left 70 more dead. Al Maliki ordered the obligatory "investigation," but 18 police officers suspected of participating in the massacre were released after being briefly detained.

In Baghdad, at least 60 people, mostly women and children, were killed when a man with an explosive belt walked into a crowded street market the Shaab neighborhood and detonated it.

Elsewhere in the capital, a bomb placed on a popular shopping street in the Baya district killed 10 people, while a suicide car bomber detonated himself at an Iraqi Army checkpoint in the Jamiya district, killing three soldiers. Meanwhile, at least 25 bodies were found throughout the city.

In Mahmudiya, a car bomb exploded near a hospital, killing four people.

Now no one said that the surge would work overnight, but if there are genuine signs of progress, not merely a few good days in a row, I keep missing them.

Photograph by Ibrahim Sultan/Reuters
Posted by Shaun Mullen at 5:20 AM
Email ThisBlogThis!Share to TwitterShare to FacebookShare to Pinterest