Woman Soldiers: The War & The Kerfuffle 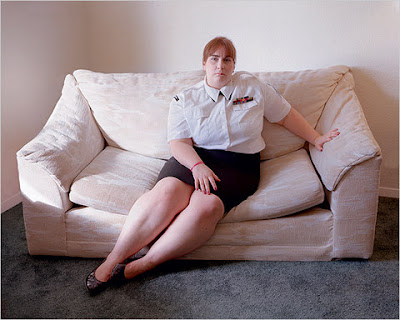 One of these two photographs has some feminists in a lather
Considering all that I have written about Post Traumatic Stress Disorder and other war-related maladies, I have been remiss in not putting up a link to a fabulous New York Times Magazine piece on how women returning home from the Iraq War have had to struggle with the violence they experienced, sometimes in the form of sexual assaults, as well as commenting on a silly kerfuffle over a photograph that appeared with the article.

The money grafs from the article:

"No matter how you look at it, Iraq is a chaotic war in which an unprecedented number of women have been exposed to high levels of stress. So far, more than 160,000 female soldiers have been deployed to Iraq and Afghanistan, as compared with the 7,500 who served in Vietnam and the 41,000 who were dispatched to the gulf war in the early '90s. Today one of every 10 U.S. soldiers in Iraq is female.

"Despite the fact that women are generally limited to combat-support roles in the war, they are arguably witnessing a historic amount of violence. With its baffling sand swirl of roadside bombs and blind ambushes, its civilians who look like insurgents and insurgents who look like civilians, the Iraq war has virtually eliminated the distinction between combat units and support units in the military."


* * * * *
Femininism is the third rail of blogging. This is because if you don’t say the right thing or say it the right way, you’re going to get zapped.

I reached this unhappy conclusion while following the latest kerfuffle in the feminist corner of the blogosphere, a silly debate over a photograph of Suzanne Swift that accompanies the Times Magazine article.

Swift (who is in the bottom photo above) says that she went AWOL after she was ordered to return to a unit where she was repeatedly sexually assaulted. She was photographed by Katy Grannan in a pose you might see in a Sports Illustrated swimsuit issue. This, claim some feminist bloggers and their posses, is shameless cheesecake and sexually exploitive. I dunno. Suzanne is fully clothed, so maybe it’s because she’s out of uniform.

I'm inclined to tell these scolds to get a life, or better still to focus on the problems so powerfully elucidated in the article, but that would be violating a canon of hard-core feminism.

You see, card-carrying members of this kind of feministm set the rules of political correctness when it comes to all things women, and those who do not play by their rules do so at their own peril. This includes even testosterone-driven old farts such as myself who have worked tirelessly to level the playing field for women during a long career in journalism and blogs about women's health issues that the mainstream media often ignores.

Incidentally, Kiko's House featured Suzanne's story way back in November, long before it reached critical mass in the feminist blogosphere for all the wrong reasons. You'd better better believe that I made sure the photo I used was PC.
Posted by Shaun Mullen at 5:46 AM
Email ThisBlogThis!Share to TwitterShare to FacebookShare to Pinterest

I liked what you wrote about women soldiers. A really interesting interview about one woman who was kicked out of the air force for posing nude in Playboy can be found at:

Ever heard of Erin Solaro? She's written extensively on women in the military. Here is her blog.

And yeah, I am a feminist who thinks the flap over the photos is misdirected. There are more substantial things to raise a stink about.

Of course there are more substantial things to raise a stink about. There always are.

And if we always concentrate on the most substantial things, the "lesser" ones continue to bite us forever.

We each choose our own battles.