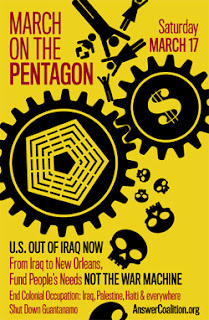 Forty years ago, I covered a big anti-Vietnam War protest March on the Pentagon for my college newspaper.

That historic event, considered a turning point in opposition to the war, is perhaps best remembered by photographs of protesters clashing with U.S. marshals and putting flowers in the muzzles of the rifles held by troops ringing the Pentagon. I can be seen on the fringes of some of the photos.

I plan to be back in the saddle this Saturday for another March on the Pentagon, this one to protest the Iraq War on its fourth anniversary, commemorate the October 1967 protest and raise awareness for a smorgasbord of other issues.

There are a lot of familiar names on the list of march endorsers, some of whom I have no truck with. These include Ramsey Clark and Cindy Sheehan, two wingnuts whom have done more to harm than help what passes for an antiwar movement in America today. But I have real respect for many others other endorsers, including Howard Zinn, Ron Kovic, James Yee and Ed Asner, and I’m not going to let a few pop-offs deter me from doing something beyond blogging about a war that I initially supported.

Getting to the march and back will be a snap: We’ll drive to the Washington ‘burbs and take the Metro to the assembly site near the Lincoln Memorial.

I’ll post a report on Sunday.
Posted by Shaun Mullen at 5:05 AM
Email ThisBlogThis!Share to TwitterShare to FacebookShare to Pinterest

I will be there, my good man with contingent from Cape Cod. Army fatigue cap with green peace symbol on one side and ACLU on other side. Also Convers sneaks in green army camo motif. I know your mug from your site. Who knows???

Cool! I'll keep an eye out for you.