The Veep Is At Work In His Office (Not) 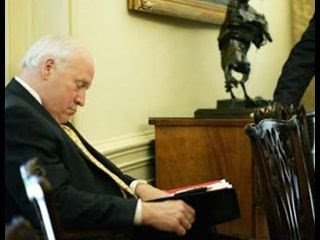 A hallmark of the Bush administration has been its penchant for secrecy and lying – even keeping things secret and lying about them when there is no good reason to do so.

In the latest example of this perverse dynamic, the veep’s office denied on Tuesday morning that Cheney had made yet another trip to the hospital because of his recurring health issues, in this instance blood clots in his leg.

A spokeswoman told CNN that there was no episode and her boss was merely at the hospital for a follow-up visit.

When word leaked out that Cheney had indeed had another clotting problem, the spokeswoman reversed field and acknowledged that the veep had experienced discomfort in his left lower leg.

Then the veep’s office again reversed field and claimed that Cheney was hard at work in his office.

When word then leaked out that he was a , the office yet again reversed field and again acknowledge that he had experienced discomfort.

How can the White House expect Americans to trust the administration on the big things when they lie about the little things?

Posted by Shaun Mullen at 4:41 AM
Email ThisBlogThis!Share to TwitterShare to FacebookShare to Pinterest