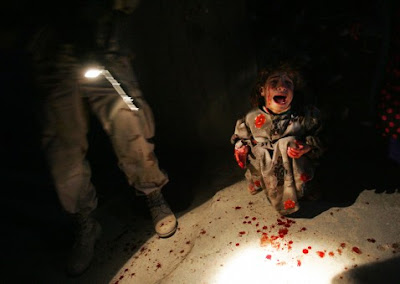 There have been two constitutional crises in my lifetime – a Vietnam era debate over whether the president can unilaterally declare war and the Watergate scandal. The table is now being set for a third over President Bush’s refusal to bow to the American people and a Congressional majority on his Iraq war policy.

In the first, which was a legacy of President Johnson bypassing Congress to take the to war in , Congress put restrictions on a president’s ability to unilaterally declare war, although only after Johnson had left office and it overrode a Nixon veto.

President Nixon himself defused the second by resigning rather than face impeachment for orchestrating an extralegal power grab that included a White House dirty tricks team, refusing to hand over evidence to Congress and, in twin echoes of current scandals, politicalization of the Justice Department and misuse of executive privilege.

Not unlike these crises, the focal point of the forthcoming one is an implacable president who seems to welcome a confrontation with a congressional majority that has the support of most Americans; in this case on finding a way to end the Iraq war sooner rather than later.

The stage has been set for this crisis because the Democrats in both House and Senate have managed to overcome ideological infighting and forge a consensus.
The engine for the Democratic initiative is the mandate the party was given in the mid-term election and the fuel the House vote last week imposing a deadline in a supplemental funding bill for the withdrawal of American troops by August 2008, if not earlier if certain benchmarks are not met. Senate Democrats yesterday beat back an effort by Republicans to remove a March 2008 deadline from their version of the bill and will now have to work in conference with their House counterparts to try to iron out differences in the two bills and draft compromise legislation that can clear both chambers and be sent to the White House.

The president’s apologists will bewail the fact that this showdown looms at precisely the time when there at last seems to be some progress in Iraq.

My short response is: Tough shit. My longer response is: Too little too late, and most Americans agree with me. Their patience is finite and they are sick and tired of being repeatedly diddled by talk that there is light at the end of the tunnel.

It is, of course, George Bush himself who is making matters worse because of his numbingly strident rhetoric against anyone opposed to a four year-plus war and occupation that should not have happened in the first place and was wretchedly executed when it did.

I can only presume that the republic will survive this crisis, as well. The keys to how protracted it will be, as well as how (or whether) it is resolved are:

* Whether Nancy Pelosi and Harry Reid will be able to keep Democrats in line.

* What Republicans who have long marched to the White House beat will do.

Senate Minority Leader Mitch McConnell has indicated that his caucus is weary of playing procedural paddy cake with filibuster threats and cloture battles. The Republicans are not about to cave in to the Democrats, but apparently will leave it to the president to make good on his veto threat when a bill curbing his war powers by legislating funding limits does reach the Oval Office.

Then there is the question of how many Republicans from the party’s re-emergent moderate bloc conclude that listening to their war-weary constituents is smarter than listening to a president who is setting up the party for another electoral defeat in 2008.

It is difficult to image this Senate ever sending a bill to this president with a veto-proof majority.

But the war in Iraq has taken so many unexpected twists and turns and George Bush is so wounded that it would be foolhardy to rule out a resolution to this constitutional crisis that hastens the end of the greatest foreign policy blunder in American history.

You may want to go look at

There is a story about how the bill will not even reach the conference committe for another 2 1/2 weeks and will have to be decided sometime after that.

I do not see the constitutional crisis. Either President Bush vetos the supplemental and has to live within current funding guidelines in the FY2007 DoD budget, he signs the bill and starts leaving Iraq before the 2008 election, Congress overrides the veto with the same effect, or Congress does not override the Veto and there is a budget shortfall. Since virtually all of the budget officers in DoD are career service, I do not see how they can violate the anti-Deficiency Act no matter what the White House does.

The real issue will be settled in the FY2008 DoD budget. It will be a true sign of Speaker Pelosi's management competence if Congress can pass all of the budget bills before September 30, 2007 since former Speaker Hastert could never get the job done.

Hi Superdestroyer. Thank you for stopping by.

I suppose that a constitutional crisis is in the eyes of the beholder.

I am seeing one here because this is really all about whether Congress can limit the president's war powers legislatively and whether the president can curb Congress's efforts to limit those powers.

This is but the opening round of a long slog and I wouldn't get too caught up in the minutiae of appropriations bills.

There has been several constitutional crisis in which this country has had to deal with.

The ones that you are quoting are not even considered Crisis by scholars. Only by antiwar/AntiBush hate mongers. Antiwar in both your cases quoted and AntiBush in the latter case.

People like you really should just retire and help your grandchildren learn to read or tend to your garden rather then pass off your agenda driven poppycock as the "Truth."

You seem to be totally bent on pure agenda driven spin to make false claims and assumptions rivaling the likes of Rush Limbaugh, Sean Hannity and Glenn Beck. It would not be surprising if you were trying to make the case "For" the war, but you are a Limbaugh, Hannity, Beck clone in reverse. You have no doubt become that which you despise.

That you for driving the discussion into your gutter.

Shaun, McCain is working at seeing the glass half full while most of the rest of us see the glass as empty. He was on Wolf Blitzer yesterday where McCain spoke of a number of recent "successes" but then Michael Ware who is CNN's correspondent in Baghdad said McCain was completely wrong. Read more on my Blog. I see this playing out in the stacked courts by Bush vs. Congress eventually. This President is so stubborn he will hang tough (or should I say stupid!)

Typical Anti war Response in the blogsphere. If someone disagrees with you then we are gutter dwelling scum.

Congress gave the president the authorization to invade Iraq. Right or wrong is irrelevant. Now the new congress won't revoke what they have already done so they are trying to use political manuevering to invoke on the president that which they are incapable of doing by any other means.

Therefore to say this is a constitutional crisis is pure hogwash. They are following proceedure and doing exactly what is prescribe in the laws and constitution of this land.

The congress can pass the budget. The president can veto it. That is how our government works. There is no crisis here other then in your mind as can best be suited to fit your agenda.