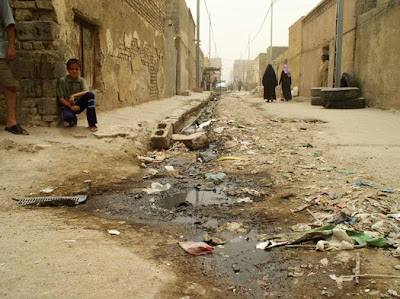 In a capital where public services barely function and five straight hours of electricity is a cause for celebration, stands out. Some 2.5 million people, nearly all of them Shiites, live in the northeastern community. Many of them lack running water and proper sewerage. Hundreds of thousands have no jobs and subsist on monthly food rations, a throwback to the international sanctions of the Saddam Hussein era.

Streets in some parts of run black with sludge. Damaged power lines provide, at best, only four hours of electricity a day.

Many soldiers were unprepared for what they found. During a patrol last week, troops brushed flies from their faces as they drove through rotting heaps of refuse and excrement that were piled outside houses. One soldier opened his Humvee's door and vomited.

Improving the quality of life for Iraqis - including those in - is part of the American strategy, articulated by the new commander, General David Petraeus. Once areas have been rid of insurgents, criminals and death squads, the hopes to pump in cash to encourage small businesses and revive the local economy.

The plan is for the Americans and their Iraqi counterparts to stay in the neighbourhoods to keep the militants from returning. But first comes security: economic improvement will have to wait until the streets are safe.