Another Big Oops For the Gray Lady 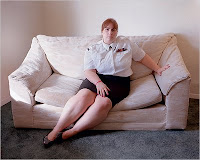 The New York Times has put up a correction stating that a Sunday Magazine article onthe problems of returning woman Iraq war vets included Amorita Randall, a woman who did not serve there but apparently believes that she did.

I mention this not to just bring further embarrassment on the Gray Lady, which makes an unconscienable number of major boo-boos these days, but because I blogged extensively last week on the article and included this Katy Grannan photo of Randall.

Back in the day, I did hundreds of military records checks on Vietnam veterans because of the (albeit) rare instances in which a trooper claimed to have served in the war but did not. So I do have to ask how the hell did the Times fact checkers fail to establish that Randall had never done a tour in Iraq?

Hat tip to Lindsay Beyerstein at Majikthise
Posted by Shaun Mullen at 5:00 AM
Email ThisBlogThis!Share to TwitterShare to FacebookShare to Pinterest