Yet Another Blow to American Justice 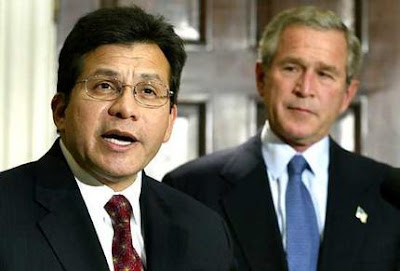 I wrote just the other day that the damage that the Bush administration has done to the American justice system is incalculable, and that long after the president retires to his Texas ranch to search among the scrub brush for his lost legacy and long after the vice president has his final myocardial infarction, we will be trying to undo the damage.

Now comes word that in yet another assault on the justice system, the White House was deeply involved in the decision to dismiss federal prosecutors.

The New York Times reports that last October, President Bush spoke with Attorney General Alberto Gonzales to pass along concerns by Republicans that some prosecutors were not aggressively addressing voter fraud.

Translation: They were being “too soft” on Democrats as the crucial mid-term election approached.

After initially stonewalling when the story broke last month, the scandal-weary White House has not even bothered to deny its involvement.

A White House spokeswoman said, however, that the president did not call for the removal of any specific U.S. attorneys and she had no indication that the president had been personally aware that a process was already under way to identify prosecutors who would be fired.

Meanwhile, Gonzales abruptly canceled travel plans today amid growing calls for his ouster. This kind of seems like a waste since the AG is the symptom and the White House is the disease, and indeed Gonzalez resisted calls to step down while continuing his serial prevaricating.

More here and here.
Posted by Shaun Mullen at 5:25 AM
Email ThisBlogThis!Share to TwitterShare to FacebookShare to Pinterest