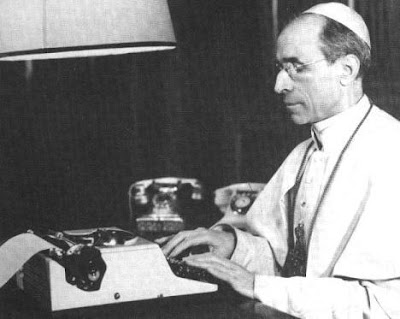 Despite years of excuse making and historic revisionism by the Holy See, it is beyond dispute to me that Pope Pius XII did not speak out forcefully against the Holocaust and did little to stop the slaughter of six million Jews, gypsies and others.

Now comes a war of words between two Italian newspapers over whether the pope was racist.

The opening volley was fired by La Repubblica, the liberal daily, which reported that historian Umberto Gentiloni Silveri had found a telegram sent to London by the then British ambassador to the Holy See, Sir D'Arcy Osborne, on January 26, 1944, reporting on a conservation he had had with the pontiff after the Allied landings at Anzio and Nettuo, south of the capital.

"The pope hopes that there will not be Allied coloured troops among the units deployed in Rome."

And then added with a hint of sarcasm:

"[The pontiff] had hastened to add that the Holy See has not fixed a limit to the range of colours."

Silveri, who is researching a book on the Allies' deliberations on whether to bomb Rome (it wasn't) told La Repubblica that the pope's "embarrassing" appeal reflected the view of the Holy See throughout the conflict that Rome was:

A "symbol of Western culture . . . a patrimony to be entrusted to the care of the white race."

Then Il Giorale, a conservative paper, responded with an article that insisted Pius XII was not in any way racist, but had good reason to fear the arrival of troops from North Africa:

"As apostolic nuncio in Bavaria, immediately after the end of the [First World] War, he had been a witness to what happened in the regions of the Rhineland and Ruhr, which were occupied by French troops."

That would be largely exaggerated claims that non-white North African soldiers were accused of numerous rapes.

"Why, if the pope was worried about North African soldiers, did he not make that clear to the British ambassador?

"And, if he was concerned about a repetition of what had happened in Germany, why should he want the French troops kept out of Rome? Surely they could wreak far more havoc out in the countryside than under the eye of their officers in a city."

To which I would add the following:

Perhaps his view was merely symptomatic of the times, but it certainly does not reflect well on this enigmatic man.

This is the most ridiculous thing I've ever heard. What did the US do? What did other churches do? Why is the Vatican - a neutral, religious state landlocked in Nazi territory (which was targeted by the Nazis already) supposed to do? They already had most of their land taken by Mussolini and were heavily scrutinized. Their first obligation was to the billions of Catholics around the world. In spite of all, it is well documented that they saved over 3000 Jews evidenced by the fake passports they issued. The Vatican did not and does not self-promote. They do many things behind the scenes without publicity. My father was in the OSS in Rome right after the war and met Pius XII who was very supportive of war relief efforts. You don't know what you're talking about.