Was Hitch Wrong About Iraq? 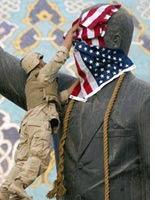 Christopher Hitchens has blown hot and cold on the Iraq war, but is most definitely not among the pundits who now say they were wrong to support it.

The irrascable journo writes in Slate that:

Four years after the first coalition soldiers crossed the Iraqi border, one can attract pitying looks (at best) if one does not take the view that the whole engagement could have been and should have been avoided. Those who were opposed to the operation from the beginning now claim vindication, and many of those who supported it say that if they had known then what they know now, they would have spoken or voted differently.

What exactly does it mean to take the latter position? At what point, in other words, ought the putative supporter to have stepped off the train? The question isn't as easy to answer as some people would have you believe.

Posted by Shaun Mullen at 4:42 AM
Email ThisBlogThis!Share to TwitterShare to FacebookShare to Pinterest