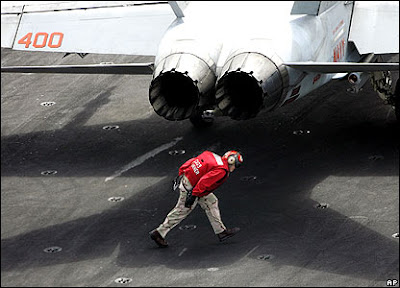 The executions [in Tal Afar] mark the first evidence of total failure of the surge plan because up to now the Shiites have acted with restraint, despite the provocations of Sunni militants. All of the evidence of the "success" of the surge at this point has to do with Shi’ite militias standing down and leaving the Sunnis alone. Perhaps that is still the case in Baghdad - though who knows for how much longer. But in Tal Afar, an example cited not only by President Bush but also by General Petraeus in his new counterinsurgency document as successful, the Shiite revenge attacks seem to be rapidly increasing. All of this suggests that either the U.S. surge plan would have worked if it included 200,000 troops instead of 28,000, or that it would not have worked regardless of how many troops were added to the mix.

You can never win. First critics said the surge would never work. Now that US and Iraqi forces have started rounding up terror suspects by the hundreds as a result of the improved security plan, the critics now complain that we've captured too many.

If you’re looking for a bellwether state in the Iraq debate, consider Nebraska. Those cornhuskers live in the center of the national map, and their two senators – as evidenced by their actions yesterday - are living proof that opposition to President Bush’s open-ended war is now the centrist stance in American politics.

Without crucial assists from conservative Democrat Ben Nelson and maverick Republican Chuck Hagel, the narrowly Democratic Senate would have failed yesterday to set a troop withdrawal date. Their support proved pivotal – the final vote was 50 to 48 – thus enabling the Senate to rebuke Bush for the first time and declare that America should essentially end, next year, its combat mission in Iraq.

Here's a postscript to today's vote in the Senate: Joe Lieberman accidentally laid bare his repeated dissembling about for all the world to see! Yes, yes, what else is new. But seriously -- what other option is there but to point this stuff out every time it happens?

On the Senate floor today, Lieberman implored his fellow Senators to vote Yes on the amendment to nix withdrawal timetables. He argued that for the "first time in a long time" there is now finally reason for optimism about -- even though he's been steadily arguing for months and months in the recent past that there was cause for such optimism.

If this is the "first time in a long time" that there's been "reason for optimism," does that mean Lieberman didn't mean it all those other times in the recent past when he suggested there was reason for optimism about Iraq?

I haven't been paying much attention to Condoleezza Rice's trip to Israel-Palestine. Why? Because I don't think she has a chance in hell of waging a solution to the conflict. The problem lies with the fact that the Bush administration has zero credibility amongst Palestinians. American officials have put relentless pressure on the Palestinian government to stop all violence against Israelis, to recognize , to marginalize Hamas, and to agree to previous peace agreements. Meanwhile, the Israeli government has not been asked to do much of anything. They haven't been asked to recognize the Palestinian state, to end the occupation of Palestinian land, to stop building the separation wall on Palestinian territory, nor to deconstruct their settlements in the . The Bush administration's biased approach towards this conflict is likely to doom Rice's attempt to broker a peace between the two sides.

[T]he Saudis, too, know how to read election returns. They see Bush swimming against a tide of scandal and stench that engulfs his most trusted aides. In the traditional Saudi worldview, this is a moment to hedge, not to indulge in the kind of leadership needed to break the Israeli-Palestinian deadlock or the deadly morass of Iraq.

The Iran/Iraq maritime boundary shown on the British government map does not exist. It has been drawn up by the British Government. Only and can agree their bilateral boundary, and they never have done this in the Gulf, only inside the Shatt because there it is the land border too. This published boundary is a fake with no legal force.

At least 471 cases of pet kidney failure have been reported in the 10 days since a nationwide recall of dog and cat food and 104 of those pets have died, a veterinarians’ information service said. Paul Pion, founder of the Veterinary Information Network, which counts 30,000 veterinarians and veterinary students as members, said the number of reported kidney failure cases had already grown even higher but said he would not have an updated tally for a few days. The maker of the recalled pet food has confirmed the deaths of 16 pets.

We kill lots of animals — the ones we find annoying, destructive or unsafe. We regularly employ toxic substances against rats, insects, prairie dogs, coyotes and invasive fish, and yet we are shocked when those same lethal substances affect us.

Americans are giving up everything that made us a country to be admired, to be emulated, to be a place where you can hope for a better life. We have operated with a might makes right approach to the rest of the world, while forgetting that the meek are supposed to inherit the earth. Not only do we not care for the least of us, we care not for ourselves. We are willing to believe that the government (that was supposed to be made small enough to drown in a bathtub, remember that line?) will make us safe from terrorists by making it difficult for suspicious people to conduct their lives legitimately. Sounds good until you realize that the definition of suspicious includes everyone not in the inner circle. Everyone. And the inner circle is secret.

I miss my country.