I Had the Strangest Dream Last Night 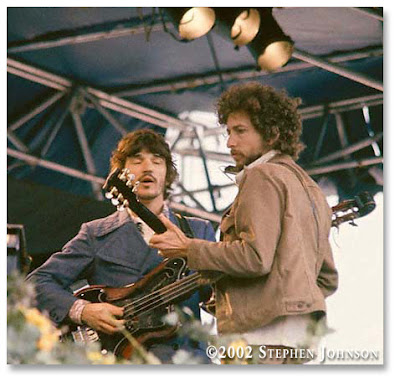 Rick Danko (left) and some other guy
. . . in which Rick Danko, the Dear Friend & Conscience and I were standing outside the Sarah Street Grill in the Pennsylvania Poconos as a light snow fell.

Danko was about to go inside to play the second of two sets. There was no soundtrack in my dream, which is unfortunate because Danko had a beautiful voice whether speaking or singing, and sing he did as an inestimable vocalist and harmonizer, as well as a kick-ass bass player, for The Band.

The strange thing about this dream is that it actually happened. February 1999, to be exact.

Although Robbie Robertson got most of the attention (or I should say hogged it), I always thought that Rick was the heart and soul of The Band. It was he who found Big Pink, the pink painted house in , where Bob Dylan did some of his finest early writing, and he who provided the powerful bass backdrop no matter the style of music, and The Band had a slew of 'em.

Rick was in bad shape by the time the DF&C and I had that chat. Alcohol and drug abuse had taken its toll. His liver had pretty much packed in and he was so weak that he played most of both sets sitting on a stool.

Rick would leave this mortal coil a few months later. I hope he is doing well wherever he is, and I thank him for stopping by last night.

* * * * *
Come to think of it, maybe I had the dream because of all the airplay a that “The Endless Highway,” a Band tribute album is getting.

Tribute albums are much in vogue, and in the case of this one, reveals that The Band’s repertoire not only holds up well in the hands of folks like Jack Johnson, Lee Ann Womack, Death Cab For Cutie and The Roaches, it positively sparkles.

More on the album here.
Posted by Shaun Mullen at 6:08 AM
Email ThisBlogThis!Share to TwitterShare to FacebookShare to Pinterest