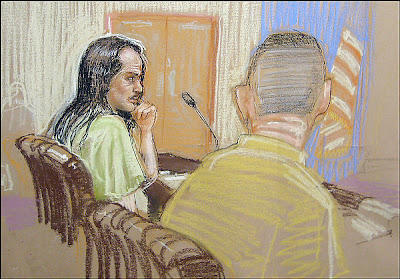 David Hicks sits with his lawyer at Guantánamo Bay

Freedom loving people can applaud Australian David Hicks' guilty plea, the first time a Guantánamo Bay prisoner has admitted to supporting Al Qaeda since the flagship prison of the Rumsfeld Gulag opened more than five years ago. The plea to one charge of material support for terrorism is a victory for the Bush administration, but it carries with it a large asterisk.

This is because Hicks's case, unlike those of hundreds of prisoners from Muslim countries, had become a hot button, and as a consequence his lawyer was able to plea bargain with prosecutors and cop a plea to a lesser offense.

Hicks' lengthy incarceration and questions about his treatment are contentious issues in Australia. The controversy was becoming a political liability for the Conservative government of Prime Minister John Howard, who after British PM Tony Blair has been the U.S.'s most steadfast ally in the War on Terror and the war in Iraq

A full military commissions jury panel will meet to decide on Hicks' sentence. Although he faces a possible life term, prosecutors have said they probably will not seek a term longer than 20 years and that term will be served in Australia.

You can be rest assured that other enemy combatants will not be cut that kind of slack.

Hicks, 31, a former kangaroo skinner, entered a plea of guilty to one specification of providing material support for terrorism and pleaded not guilty to one specification of supporting terrorist acts. Prosecutors alleged that Hicks trained with Al Qaeda in Afghanistan and met Osama bin Laden, but they were not prepared to present evidence that Hicks attempted to kill anyone.

Hicks' father Terry says that the guilty plea was the only way he could get out of the prison:

"No one's going to help him, the Australian government couldn't care, they don't care. . . . It's a way to get home, and that's what he's told us. He just wants to get home.

"He's had five years of absolute hell and I think anyone in that position, if they were offered anything, they would possibly take it."

Drawing by Janet Hamlin/The Associated Press
Posted by Shaun Mullen at 6:58 AM
Email ThisBlogThis!Share to TwitterShare to FacebookShare to Pinterest

Greetings Comrade!
We've been protesting the Military Commissions Act since October. If you're interested in joining us, find out more at http://ministryoflove.wordpress.com
Regards,
O'Brien