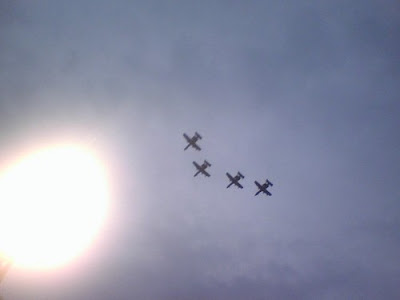 Scandals have a way of becoming black hole-like in that they suck any associated dirty linen into their maws and spit it out for all the world to see.

The O.J. Simpson case is the Bigfoot of this phenomenon. Before The Juice's criminal and civil trials were over, practically everyone associated with the sordid affair had been revealed as everything ranging from drug addicts, unfit mothers and serial philanderers to turnstile jumpers, shoplifters and jaywalkers.

And so it is with the ongoing U.S. attorney firing scandal, the one that Republicans claimed would quickly sink with nary a whimper.

All sorts of associated dirty linen is being aired because of the scandal, but my favorite to date is the unauthorized flyover of Air National Guard fighter jets at the grand opening of a Toyota dealership owned by a Republican Party big in Roswell, New Mexico.

This Only in America moment has now gotten a second life because of an anti-David Iglesias radio ad running in New Mexico, as well as that Josh Marshall fella.

Iglesias, of course, is the U.S. attorney infamously axed for not kissing the backsides of a New Mexico Republican senator and congresswoman who wanted him to get tough with Democrats before the crucial November 2006 mid-term election. Marshall, of course, is the blogger that kept the scandal from dying because of doggedly digging into its roots with the help of his readers at Talking Point Memo.

Anyhow, the radio ad is being run by a group called New Mexicans for Honest Courts (sic).

The website of the group (sic) says that its chairman is Linda Chavez Krumland, who is a major Republican contributor, was an at-large delegate to the 2004 Republican National Convention, and owns Roswell Toyota.

Her husband, Tom Krumland, also a 2004 RNC delegate, hit a rough patch after he and Dan Foley, a Republican state representative, snookered the New Mexico Air National Guard into arranging an F-16 flyover at the grand opening of the dealership the day before Veterans Day 2005 when the commanding general thought it was for something else altogether.

This gross misuse of taxpayer money might have gone unnoticed except that Tom Krumland forgot to invite local veterans groups to the festivities and they raised heck.

"If we offended anybody, then they’re unpatriotic."

He later apologized (sic).
Posted by Shaun Mullen at 5:25 AM
Email ThisBlogThis!Share to TwitterShare to FacebookShare to Pinterest