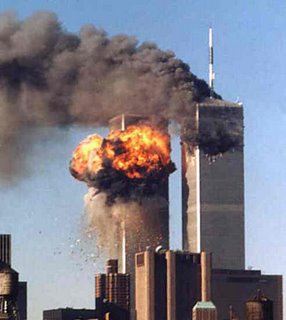 It is now beyond dispute that the North American Aerospace Defense Command failed to lock onto any of the four hijacked planes on the morning on September 11, 2001, let alone scramble fighters to try to intercept them.

Vanity Fair writer Michael Bronner apparently is the only journalist who has listened to the complete audiotapes—covering six and a half hours —made in the NORAD Northeastern Air Defense Sector bunker deep in the Adirondack Mountains of rural New York state that morning.

The story of what happened in that room, and when, has never been fully told, but is arguably more important in terms of understanding America's military capabilities that day than anything happening simultaneously on Air Force One or in the Pentagon, the White House, or NORAD's impregnable headquarters, deep within Cheyenne Mountain, in Colorado. It's a story that was intentionally obscured, some members of the 9/11 commission believe, by military higher-ups and members of the Bush administration who spoke to the press, and later the commission itself, in order to downplay the extent of the confusion and miscommunication flying through the ranks of the government.

The truth, however, is all on tape.

(A personal observation: Lest there be any misunderstanding, let's be clear that the likelihood of shooting down three of the four hijacked jetliners was extremely slim even under the best of circumstances. We'll never know if United Airlines Flight 93 could have been intercepted. What this post is about is not "what if," but as Bronner says, understanding what happened that day, as well as exposing lying and deceit at the highest levels of government.)

Bronner states that these tapes prove that:

* There was no command given to shoot down United 93, despite implications to the contrary made by Vice President Cheney.

Cheney was not notified about the possibility that United 93 had been hijacked until 10:02 a.m.—only one minute before the airliner crashed into a field in Western Pennsylvania and before anyone in the military chain of command, let alone at NORAD, even knew it had been hijacked. A shootdown order did not come from President Bush until 15 minutes later.

* Parts of the testimony of ranking NORAD officials to the 9/11 Commission was patently false.

For example, Major General Larry Arnold and Colonel Alan Scott stated that NORAD began tracking United 93 at 9:16 a.m., but the plane had not even been hijacked.

* Realizing that they had been caught flatfooted, NORAD commanders scrambled fighter jets to intercept what they feared were 10 more potential hijackings as the day wore on.

Fighter pilots over New York, Washington, Boston and Chicago spent hours darting around their respective skylines intercepting hundreds of aircraft they deemed suspicious. A total of 300 armed jets were in protective orbits over every major American city by the following morning.

Bronner has high praise for Major Kevin Naspany, the crew commander and others in the bunker, once they realized what was happening:

At one point, in the span of a single mad minute, one hears Nasypany struggling to parse reports of four separate hijackings at once. What emerges from the barrage of what Nasypany dubs "bad poop" flying at his troops from all directions is a picture of remarkable composure. Snap decisions more often than not turn out to be the right ones as commanders kick-start the dormant military machine. It is the fog and friction of war live—the authentic military history of 9/11 .

You can read the entire article and listen to the tapes here.
Posted by Shaun Mullen at 2:56 AM
Email ThisBlogThis!Share to TwitterShare to FacebookShare to Pinterest

I have a theory that arrogance, incompetance and avarice sort of feed into one another and create situations that look conspiritorial.

Part of the reason being that when the shit hits the fan, everyone is running to cover their ass.

In the case of 9-11, all I can be sure of is that the reality of what happened doesn't fit the story.

The thing is: Just because we point out that the story has lies and mis-information sticking out of the whitewash here and there doesn't mean that we are obligated to come up with an answer -- that means we want some info that doesn't smell like it was wiped off somebody's shoe.