King George III: An Update on That Mighty Wind 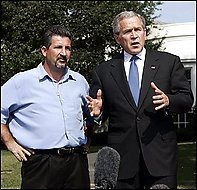 Just yesterday I noted that the Bush administration will be unleashing a hurricane of its own next week to try to counter Democrats' plans to use the botched federal response to Hurricane Katrina and the Gulf Coast region's painfully slow recovery in the November elections. The PR blitz will include a two-day visit to the area by The Decider himself.

Now comes Rockey Vaccarella, who has hitched his FEMA trailer to his truck and towed it to the White House in what the news media is portraying as a spontaneous effort to garner attention for the plight of hurricane survivors.

Well, my bud and former colleague Will Bunch, who is doing some of the best current events blogging anywhere at Attytood, did a little digging on Poor Mister Vaccarella and -- surprise! -- learns that he is a lifelong Republican and highly successful businessman.

And -- surprise! surprise! -- Rocky already had a Wednesday meeting scheduled with The Decider when he set out from St. Bernard Parish, Louisiana. Spontaneous, my ass.

I guess I should be innoculated against the ability of the Bush administration to use human suffering for political gain, but I'm not and never will be.

I am sure that the White House sees the Vaccarella saga as a PR coup, a way to connect an administration utterly out of touch with the average Joe.

I see it as yet another example of a president so callous and devoid of humanity that he will stoop as low as it takes to further what passes for an agenda.