Terrorism I: The Smell of Stale Gatorade 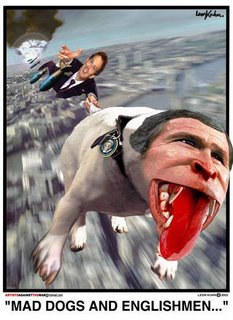 Well, a week has gone by since British police swooped down on 24 alleged terrorists who they said were planning to blow up U.S.-bound jetliners over the Atlantic using beverages laced with explosives.

If this is the next "Big One" that counterterrorism experts have warned about, then where's the beef, guys?

Pardon me for feeling just a tad skeptical about the whole thing at this point.

No charges have been filed against the suspects. Police have asked magistrates for more time before they decide whether to charge or release them. No bombs were found. No airline tickets had been purchased. Many of the alleged plotters didn't even have passports.

So why the big rush to arrest them if they had been under surveillance for a year?

I'm not ready to buy into the notion that George Bush told Tony Blair to step on it to make political points before Joseph Lieberman's upset defeat to an antiwar candidate in Connecticut, but British authorities dragged their feet and didn't move to make arrests until afterwards.

But ain't it curious that Vice President Cheney, who along with Bush had known about the alleged plot for some time, decided to call a rare teleconference with select reporters the day after Lamont's victory and a day before the arrests in the U.K. to rattle the GOP terrorism sword and claim yet again that there was a pre-U.S. invasion link between Iraq and Al-Qaeda?

Were we played yet again?

Maybe so considering that the only thing that the Republican Party has to campaign on at this point is their claim that they're stronger on terrorism than the Democrats.

There is a smell beginning to emanate from the whole thing and it ain't stale Gatorade.

Kevin Drum at Political Animal shares my skepticism. He is shocked that Home Secretary John Reid, who is Britain's chief law officer, acknowledges that some of the suspects might not be charged with major criminal offenses but said there was mounting evidence of a "substantial nature" to back the allegations. Says Kevin in a post titled The Incredible Shrinking Bomb Plot:

"Mounting" evidence? Shouldn't we already have lots of evidence after over a year of intensive surveillance? WTF is going on here? And then there's this:

Two top Pakistani intelligence agents said Wednesday that the would-be bombers wanted to carry out an al-Qaida-style attack to mark the fifth anniversary of the Sept. 11 strikes, but were too "inexperienced" to carry out the plot.

The two senior agents, who spoke on condition of anonymity, said that if the terror cell members arrested in Pakistan and Britain had appropriate weapons and explosives training, they could have emulated massive attacks like those five years ago in New York and Washington as well as the July 7, 2005, London bombings.

Sure, and if I had an IQ of 200 and a PhD in oncology maybe I could find a cure for cancer. But since I don't, no one should stay up nights waiting for me to produce one. Likewise, there are lots of dimwit copycats who'd like to be the next Osama bin Laden, but they're not worth more than a routine roundup unless they have the serious operational capacity to do something about it. These guys, on the contrary, "had not attended terror-training camps in Pakistan or Afghanistan and had relied on information gleaned from text books on how to make bombs."

I won't pretend to know what to think about the way this has been handled. Was it about winning elections? Building public support for draconian security legislation? Plain old bureaucratic incompetence?

Or was it real?

Brits share our skepticism, according to a story in the Guardian, as does former President Clinton, who got in Bush's face during remarks on ABC's "Good Morning America":

I don't think the foiling of that London bomb plot has any bearing on our Iraq policy.

They seem to be anxious to tie it to Al Qaeda. If that's true, how come we've got seven times as many troops in Iraq as in Afghanistan? Why have we imperiled President (Hamid) Karzai's rule and allowed the Taliban to come back into the southern part of Afghanistan?

Good question, Bill.
Posted by Shaun Mullen at 2:16 AM
Email ThisBlogThis!Share to TwitterShare to FacebookShare to Pinterest