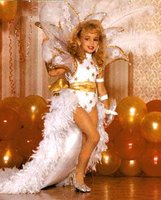 There's not a whole lot that I can add to the frenzy of coverage over the arrest of a 41-year-old pervert in the 1996 murder of little JonBenet Ramsey, but since I covered the early stages of the murder investigation I thought I'd offer my two cents worth.

I always had the feeling that the assailant did not mean to take the life of the six year old, and originally suspected her brother. In any event, John Mark Karr is telling authorities that he loved her and indeed did not intend to kill her.

I also was appalled at how JonBenet's mother, Patsy, took her around to beauty pageants like she was some kind of pedigreed show dog, but that is a world I clearly do not understand.

Any child is prey for a sicko like Karr, and JonBenet could have just as easily been assaulted at a playground or snatched at a shopping mall. But I always wondered if her second "career" as a little beauty queen had made her more vulnerable.

MEANWHILE . . .
In other sex pervert news, Lou Beres, the leader of the Christian Coalition in Oregon has admitted to sexually touching his sister-in-law and two of his daughter's friends when they were in their teens.

A statute of limitations prevents the victims from seeking criminal charges.

More here.
Posted by Shaun Mullen at 2:10 AM
Email ThisBlogThis!Share to TwitterShare to FacebookShare to Pinterest

Sick-tastic story, that's for sure...

My wife is foreign, and I've been having to do a lot of unpleasant explaining about this whole scene. Out of earshot of our small kids, no less.

I feel for you and your wife, S.I.

People whose sexual dysfunctions prompt them to act out on others are, of course, sick, so merely calling them perverts is a bit crude on my part. And while virtually all of them are men, they come in all shapes and sizes and nationalities, although I was not surprised in the least that JonBenet's perpetrator was arrested in Thailand, where the sex industry continues to thrive under the government's knowing nose.