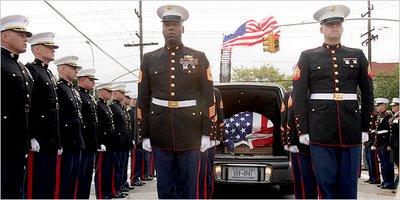 Michael Glover put his life on hold after 9/11 and joined the Marines.
The fifth anniversary of the 9/11 attacks will be only the first of two significant milestones in the annals of 21st century America to occur before the end of the year. The second will be when the number of Americans who have died in Iraq and Afghanistan exceeds 2,973, the number of people who died in the attacks on the World Trade Center and Pentagon and the crash of United Flight 93.


Some 340 American soldiers have died in the war in Afghanistan, which was an appropriate response to the terror attacks.

Some 2,616 American soldiers, including Michael Glover, have died in Iraq because of a war that has nothing to do with the terror attacks.

The fact that President Bush has finally acknowledged that there is no connection between the two does not mitigate this second tragedy, let alone his culpability, and the subdued response to the Pinnochio in Chief's admission is both infuriating and a tragedy in its own right.

I pray that no more Americans die in a terror attack, although that probably is wishful thinking. What is a lead pipe cinch is that many more Americans will die in Iraq.

Why? And for What?

NO LIGHT, LONG TUNNEL
Next month, the duration of combat operations in Iraq will exceed the length of time that U.S. forces fought in Europe during World War II. Operations in Afghanistan have lasted longer than the Civil War and World War II -- with only the Revolutionary War and the Vietnam War lasting longer.

The president, in addition to admitting that there was no connection between 9/11 and Saddam Hussein, also has abandoned claims that the U.S. has seized the high ground. A majority of the public now opposes the war and it threatens to take down the president's own party in November elections.

It's the endlessness of it all. Basically, there is no light at the end of the tunnel -- or if there is light, the tunnel is just much too long.

THE PRAYERFUL STATUS QUO
Despite an intense surge in religious activity and expression in the weeks immediately following 9/11, the faith of Americans is virtually indistinguishable today compared to pre-attack conditions, according to the results of a new survey published in Church Executive magazine.

Some churches experienced more than double their normal attendance on the Sunday after the attacks, but by January 2002, churchgoing was back to pre-9/11 levels and has remained consistent in the five years since.

Other religious behaviors, if they were affected at all, found equilibrium even more quickly. As of October 2001, Americans' engagement in Bible reading and prayer was no different than pre-attack levels and has been essentially consistent from that point on.

Less publicized was the fact that several religious beliefs shifted right after the attack. But these changes were also short-lived, returning to pre-9/11 conditions by early 2002. For instance, October 2001 data showed that Americans were less likely to feel a responsibility to share their faith; they were less willing to reject the notion that good works can earn salvation; they were more likely to believe that the devil is merely a symbol of evil; and they were slightly less likely to believe God is the perfect, all-powerful creator who rules the world.

These shifts in beliefs went against conventional wisdom that Americans' were flocking to orthodox biblical perspectives. Instead, throughout the period of emotional insecurity many adults became increasingly skeptical of traditional religious views. Nevertheless, even this skepticism quickly faded to the status quo by January of 2002.

LIVE ALL OVER AGAIN
CNN will mark the 9/11 anniversary by replaying on the Internet the cable network's coverage of that day's events.

Viewers can watch how events unfolded starting at 8:30 a.m., minutes before the first reports of an airplane hitting the World Trade Center. The feed will run in real time, as the network showed it five years ago, until midnight.

For the day, CNN will make all four feeds on its online video service, CNN Pipeline, available for free. Live reports of memorial services will be available through one of the feeds. So that viewers won't accidentally stumble upon graphic footage, the replay feed will be covered with a notice instructing users to click only if they want to watch.

(Photo by Hiroko Masuike/The New York Times)
Posted by Shaun Mullen at 12:13 AM
Email ThisBlogThis!Share to TwitterShare to FacebookShare to Pinterest