I'm Gonna Watch CNN Blonde, How About You? 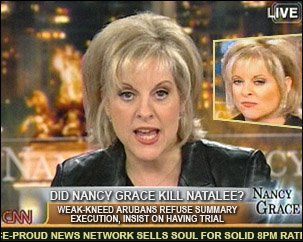 My pal Will Bunch at Attytood has a bloody brilliant idea:

Right this minute on CNN, about 40 percent of the news is Real News (Iraq, Bush lawbreaking) and about 60 percent is Made-Up News (terror alerts, JonBenet Ramsey). Unfortunately, it's the Made-Up News that gets the highest ratings.

So why not pull an MTV and split CNN into three channels (and for the purpose of our argument, we're ignoring the wretched CNN Headline News that actually exists)? There would be CNN News, covering only things that verifiably happened, CNN Rumor, which would cover only airport terror alerts (until they abruptly disappeared) and stuck landing gear incidents, and CNN Blonde, for all coverage of JonBenet Ramsey, Natalee Hollaway, and "Runaway Bride" type cases.

The only other solution we could think of would be to put some new people into American government, and steer CNN and the other channels back into 1990s mode. Remember the '90s, and all the OJ and JonBenet overkill? It was sickening stuff, but it was still better for the body politic than the stream of bogus terror alerts that are likely between now and November.