Iraq I: 'We Are In For a Season of Trials' 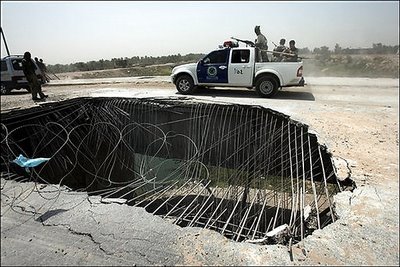 A Bridge Not Far Enough: Car bomb on Baghdad span kills five
Remember the Vietnam Syndrome, the term used to described a chastened post-Vietnam War America that withdrew from the world scene and was afraid to defend its overseas interests?

Well, welcome to the Iraq Syndrome.

There is evidence that mischief makers are taking advantage of the chaos in Iraq, a befuddled White House and a divided and war-weary American public, according to Stephen Biddle and Ray Takeyh, senior fellows at the Council on Foreign Relations, who write in the International Herald Tribune that:


Before the Iraq Syndrome, American power exerted a major restraining influence on actors such as Hezbollah, Iran and Syria. Rather than encouraging Hezbollah adventurism, Iran restrained it . . . Iran acquiesced in the American takedown of the Afghan regime on its eastern border. Syria cooperated with America's war on terrorism and seemed willing to arrive at an accommodation with Washington. Even major powers such as Russia were more compliant, as Moscow accepted American military bases in neighboring former Soviet countries.

In 2006, by contrast, Hezbollah adventurism now gets the go-ahead from Tehran. An Iranian nuclear program that had crept forward at a rate designed to keep it under Western radar screens and safe from American retaliation now accelerates with apparent unconcern for the prospect of U.S. opposition, while Iran's firebrand president, Mahmoud Ahmadinejad, concludes his speeches with the cry, "America cannot do a damn thing."

At the same time, a North Korean nuclear program that accepted a modest buy-out in the 1990s now holds out for bigger payoffs while reprocessing nuclear fuel into bombs with impunity.

The Iraq Syndrome is likely to get worse before it gets better - and as it does, challenges such as Hezbollah, Iran and North Korea are likely to become more common. We are in for a season of trials that could create vexing challenges for U.S. foreign policy for a very long time to come.

Need further evidence that the Iraq-U.S. plan to restore order to Baghdad has been a flop? More civilians were killed there in July -- and nationwide, as well -- than in any month of the war.

An average of more than 110 Iraqis were killed per day in July, according to figures from 's Health Ministry and the Central Morgue. At least 3,438 civilians died violently that month, a 9 percent increase over the total in June and nearly twice as many as in January.

The Baghdad morgue alone received 1,855 bodies in July, an 18 percent increase over June, which broke the May record, whick broke the April record.

Back in March, I enthused about the creation of the Iraq Study Group, a task force to examine U.S. policy in Iraq that included some big names who had been lukewarm toward or even opposed to the war. I wrote that:

Goverment task forces have a way of coming and going without leaving a wake, but this one may be different because it offers cover for a president with a discredited war policy who is desperate to extricate himself from a bloody mess of his own making without appearing to concede ground to his more vocal opponents.

The ISG is not expected to issue a report until fall, but events certainly have overtaken its mandate. With even some pro-war Republicans clammoring for a troop withdrawal timetable and nearly two in three Americans telling pollsters that significant withdrawals should begin before year's end despite the chaotic state of Iraq, it is difficult to imagine what the task force can recommend that already isn't evident.

(Photo by Hadi Mizban/Associated Press)
Posted by Shaun Mullen at 5:14 AM
Email ThisBlogThis!Share to TwitterShare to FacebookShare to Pinterest