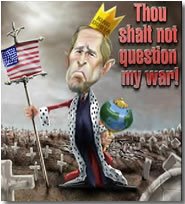 If the Iraq war wasn't such a bloody tragedy and the Bush interregnum such a disaster, it would be kinda fun to watch the current squirming of the president's apologists, a goodly number of whom are jumping ship.

These include some big names, among them George Will, William F. Buckley and William Kristol.

First to a chastened Gerard Baker, a Times of London columnist, who has finally seen the light:

[T]he US could take the risk of alienating the world and discarding international law only if its leadership was going to be effective. Instead its leadership has been desultory and uncertain and tragically ineffective.

It tried unilateral pre-emption in Iraq, but never really had the will to see it through. So with Iran, it went all mushy and multilateralist. In Lebanon, it thought it would cover all the bases — start by aggressively supporting Israel, then go all peacenik, holding hands with the UN in a touching chorus of Kumbaya.

Now we have the worst of all worlds. Not only is the US despised around the globe, it can’t even make its supposed hegemony work.

It’s one thing to be seen as the bully in the schoolyard; it’s quite another when people realise the bully is actually incapable of getting anybody else to do what he wants. It’s unpleasant when people stop respecting you, but it’s positively terrifying when they stop fearing you.

NATTERING NAYSAYERS
Mona at The Inactivist provides a handy roundup of the new crop of Bush naysayers, as opposed to the group she calls The Invincibly Ignorant.

Among the converted are The Commissar, who sheepishly admits that:

For three-and-a-half years, the administration has never faced up to a lousy situation, and instead has substituted happy talk. There is every evidence that they have based policy, not on facts, but on wishes. . . .

The result in Iraq is shameful. Rick [Moran] and I and many other conservatives supported this president and this war, and it has degenerated into exactly the kind of mess that many, many voices (some of whom I respect, some of whom I still don’t — as if that mattered) warned about from the get-go.

Give credit to The Commissar for being able to change his mind.

IT'S JUST MISUNDERCOMMUNICATING
The flames are licking at John Fund's heels, but he's not abandoning Georgie Dearest. Fund just wishes that the president would communicate better in a Wall Street Journal op-ed piece. As if this were just about communicating.

Fund's mathematical abilities also suck. He notes that Bush's poll approval ratings are 40 percent. They haven't been that high in months.

CAN WE HAVE SOME OF WHAT THIS GUY'S SMOKING?
Finally, there is blogger Mario Loyola (a real name?) over the the National Review Online.

Says Mario, who qualifies as a poster boy for the Invincibly Ignorant:

Bush has virtually never in his political career made a decision that he didn't think was the right thing to do and the right way to do it. Conservatives who are piling on the anti-Bush bandwagon should consider that this trait—which makes the Bush family historically great—is a historical rarity to be treasured. . . . [I]t was not so long ago that Americans could only wish for a president who was obviously trustworthy, upstanding, and principled. And the day is not far off when we will think ourselves lucky to have seen this President defend the honor and integrity of his office—and the American people—for eight years.

THE NOISE MACHINE BARKS BACK
The Bush administration noise machine is not taking these defections sitting down.

When George Will wrote a Washington Post column last week mocking neocons for their spluttering over the Middle East, the White House shot back with an email rebuttal sent to journalists and other worthies that was three times as long as the column.

Mr. Will's kind of "stability" and "realism" -- a kind of world-weary belief that nothing can be done and so nothing should be tried -- would eventually lead to death and destruction on a scale that is almost unimaginable.

THE 'HE'S AN IDIOT' STRATEGY
The Republicans have been adept in co-opting the Democratic message, when there is one. Blogger Kathleen Reardon suggests that Republicans may be able to undercut the message that President Bush is, in so many words, an idiot:

If selected, visible, staunch Bush supporters begin talking about how intellectually wanting the President is, with his full knowledge and collaboration (such as chewing with his mouth open, striding motorcycles, goofing around with unappreciative world leaders), there won't be an anti-Bush platform for the Democrats. In fact, if these balloonists play their cards right, it will seem as if there isn't a nickel's worth of difference between Republicans and Democrats. Everyone will be anti-Bush. The playing field will be leveled.

PUTTING IT ALL IN PERSPECTIVE
Eugene Robinson notes in a Washington Post op-ed piece that the idiot argument is indeed gaining traction, most notably in a segment of Joe Scarborough's MSNBC yackathon devoted to "George Bush's mental weakness," with a legend at the bottom of the screen that impertinently asked: "IS BUSH AN 'IDIOT'?"

It's tempting to go there, but I'm not sure we'd get very far. While we have the president on the couch, I'm more interested in trying to understand his emotional response -- or lack of response -- to the chaos he has spawned.

According to the Iraqi government, 3,438 civilians were killed in July, making it the bloodiest month since the invasion. The president was asked yesterday whether the failure of the U.S.-backed "unity" government to stem the orgy of sectarian carnage disappoints him, and he said that no, it didn't. How, I wonder, is that possible? Does he believe it would be a sign of weakness to admit that the flowering of democracy in Iraq isn't going exactly as planned? Does he believe saying everything's just fine will make it so? Is he in denial? Or do 3,438 deaths really just roll off his back after he's had his workout and a nice bike ride?

(Hat tip to Andrew Sullivan and David Weigel at The Daily Dish for the Baker quote and Wehner email.)
Posted by Shaun Mullen at 1:46 AM
Email ThisBlogThis!Share to TwitterShare to FacebookShare to Pinterest