War & Peace: What Is It With Japan? 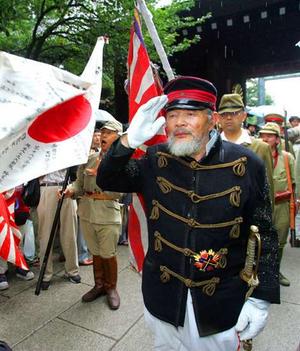 A Japanese war veteran this week at Yasukuni Shrine
Sixty one years after the end of World War II, Germany is a fully fledged player in Europe and the world. Its Nazi past is not forgotten, but is no longer an issue. By contrast, Japan is a marginal player in Asia and nearly invisible on the world stage. And its militaristic past remains very much an issue.

That was on display again this week as Prime Minister Junichiro Koizumi visited Yasukuni Shrine in Tokyo for the fifth straight year to mark the anniversary of the end of the war.

Yasukuni is a Shinto memorial where the names of the nation's greatest war criminals, all executed after post-war trials, are enshrined along with 2.5 million Japanese dead from several wars. The shrine played a central role in promoting wartime nationalism and today is the most potent symbol of Japanese agression.

Soldiers who pledged to fight to the death commonly promised each other to "meet at Yasukuni," and the shrine includes a museum that tries to justify Japan's invasions of its neighbors.

Koizumi's visit provoked the predictable condemnations from China and the Koreas, which suffered deeply under the Japanese fist.

I have more than a passing acquaintance with Japan. With Tokyo as my base, I traveled the country in the early 1970s. I made many friends and became deeply enamored of Japanese architecture, art, drama and cuisine, as well as their love of American jazz.

But I also came to understand that the Japanese are literally and figuratively insular and xenophobia is a national trait. They also are deeply racist.

These traits go a long way toward explaining why Japan rose from the ashes of World War II to become an economic colossus but has not been able to shake off its imperialist past and become a major player on the political stage regionally and globally.

As dictated by their American conquerers, Japan's so-called "peace" constitution permits only a small defensive military force. Although it is long past time for Japan to grow its own military capability and play a larger security role, the Japanese themselves recognize that there is something in their national character that has prevented them from accepting and taking responsibility for their past. And the prosect of a militarist future is deeply worrisome.

Japanese textbooks still paper over the country's barbarous wartime conduct. Pearl Harbor notwithstanding, many Japanese believe that their country was not the aggressor and atrocities like the Rape of Nangking never happened. Fully half of all Japanese supported Koizumi's visit to Yasukuni, according to public opinion polls, with about a third rationalizing the visit as necessary to save face because of condemnations from China and South and North Korea. Ah, yes, saving face.

These sentiments make the prospect of a remilitarized Japan a frightening prospect to Japanese who believe that despite the outward appearances of a sophisticated society moving with alacrity into the 21st century, a middle course between pacifism and militarism is not possible.

I regret to say that I have to agree.

Japan is at a crossroads. Its population is aging and its birth rate continues to drop. There will literally not be enough people to run Japan's factories and institutions in a few decades, while its immigration policies make it extremely difficult for non-Japanese to become citizens, let alone enter the workforce.

I moonlighted at a newspaper in Tokyo where my boss was a talented man whose father was Japanese and mother Chinese. Although he was easily the brightest star in the newsroom, because of his mixed parentage he had no chance of being promoted above the lower middle-management position he had held for years and would have until he retired. As a gaijin (foreigner), I stood no chance of getting a decent job.

* * * * *
No, not all Japanese are racist xenophobes. My friends certainly weren't, and as painful as the subject was, they acknowledged the truth about Japan and World War II and its inability to come to terms with its past. Some had spent time in Europe and the U.S. and several attended American universities. Coming home, shaking off the Western ways that had loved and accepting their parents' wishes that they accept the old ways was painful to watch.

My landlady, Mrs. Mioshi, was one of the first Japanese women to attend Oxford University in England. We became good friends, and one evening after farewell dinner with she and her husband in their upstairs apartment, she said that she wanted to show me something before I flew home.

She explained that she had brought back a lovely Wedgewood china dinner service from England before the war and had buried it deep in the back yard of their Tokyo home early in 1945 when the U.S. advance up the Pacific enabled its B-29 bombers to reach Tokyo.

The Mioshis lived out the closing months of the war with relatives in the country. They returned after the surrender to find Roppongi, their neighborhood, decimated from firebombings.

Mrs. Mioshi told this story as she opened the doors to a cupboard and pulled out a dinner plate.

"It was a lovely ivory white," she explained as she handed the plate to me. "But you can see what the intense heat of the firebombings did."

Indeed. The plate had turned an otherwordly cobalt blue, as had the rest of the dinner service.

"I forgive the Americans for what they had to do," Mrs. Mioshi said in her tiny voice. Japanese often look down when they address gaijin, but she looked me right in the eye.

"It is just that we will never be able to confront our past, let alone forgive ourselves for it."

Posted by Shaun Mullen at 2:05 AM
Email ThisBlogThis!Share to TwitterShare to FacebookShare to Pinterest

highwayscribery said...
This comment has been removed by a blog administrator.
12:05 PM