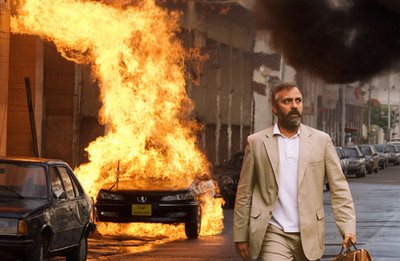 George Clooney carelessly flicks cigarette butt on Teheran street.
As if I wasn't already depressed about the state of world affairs, I finally saw "Syriana" the other night.

If you missed it, "Syriana" concerns the disappearance of a U.S. missile in Iran, the heir (Alexander Siddig) to a Middle Eastern emirate giving a lucrative oil contract to China, thereby cutting out a major U.S. company, the major oil company merging with a smaller company and firing its Pakistani oil field workers, a Department of Justice investigation led by an eagle-eyed attorney (Jeffrey Wright) into the merged company headed by sharks (Christopher Plummer, Chris Cooper and William C. Mitchell) for a multi-million dollar bribe in connection with an oil contract, an American economist (Matt Damon) parlaying the death of his son into a deal to advise the heir, whom the CIA wants dead, the fired Pakistanis joining a violent fundamentalist group and training for a suicide mission, a CIA agent (George Clooney) who is double crossed and tries to stop the heir's assassination . . . Whew!

Yes, there's a lot going on in this gem of a movie. But the bottom line is the limitless power of the people who run the oil industry to influence global politics, as well as the ebb and flow of economies and the financial markets, and their inherent treachery in an era that happens to be dominated by the growing menace of international Islamic terrorism.

Although oil rich plays a relatively minor role in "Syriana," it is playing an increasingly important one in global politics. It is the leading state sponsor of terrorism, yet the Bush administration seems uunable to get beyond name calling. (Islamofascists is currently in vogue.)

It is not difficult to see why the White House is so at sea.

* Iran is a rogue Islamic state that subjugates its own people at point of gun and does not play by the rules of international diplomacy, whatever they are these days. Of course, neither does the U.S., or does only when it suits it.

Nevertheless, the fact of the matter is that Iran has an enormous stockpile of ballistic missiles, a number of which recently were given a pretty good workout by Hezbollah, a growing nuclear program and the deep pockets to keep its terrorist patrons in IEDs. For good measure, stir in the consequences of the U.S.'s pathetic Iran "policy" since the overthrow of the Shah in 1979 and the long shadow that casts.

* The U.S. has lost its way in the Middle East.

It has been unable to stabilize Iraq, which has become a catastrophe of its own making in part because of the power of the Shiite insurgents that Iran bankrolls. It. has been an ineffectual player in the Israel-Hezbollah conflict. Why then should it be able to formulate a cogent policy in Iran?

* The administration is so adrift that it has gone into scapegoat mode.

Just this week, senior White House officials and top Republican lawmakers have gone public with a report charging that U.S. spy agencies have (again) been asleep at the wheel and have not issued appropriately ominous warnings about the threat that they say Iran represents. (If this seems counterintuitive, it's because it is: U.S. spy agencies up-played the threat that Iraq represented after the fact to suit the Bush administration's ends-justify-the-means decision to invade.)

* There are way too many people pressuring the administration -- including some inside the White House -- to attack Iran. You know the scenario: The Irani people would then rise up, overthrow the ayotollahs and throw flowers at the feet on the conquering Americans.

Uh, wait a minute. Didn't the U.S. try that somewhere else recently?

* Leave resolving the whole stinking mess to the next president as President Bush is doing with Iraq.

Alas, buying time is no more an option than wasting it has been.

If that sounds familiar, it is what the international community used with Iraq in the years between the first Gulf War and the U.S. -led 2003 invasion.

In retrospect, this tandem approach worked better than anyone knew at the time.

Alas (again). Iraq then is not Iran now, which brings us back to "Syriana," which includes several scenes involving a group of influential Americans who want to liberate Iran -- for its oil. (Any similarities with the Washington gang beating the war drum is merely coincidental. Then again . . . )

Sanctions would be only as effective as the ability to bottle up Iran's capacity to export the stuff, and it is beyond imaginable that China, Iran's biggest customer, would join in an international effort to turn off Teheran's revenue tap.

There's also the little matter of the Strait of Hormuz, which is the only sea passage for most of the petroleum-exporting Gulf states. Iran would blockade the straits in a heartbeat if it couldn't export its own oil. That would affect the delivery of almost everyone else's oil and send the U.S. economy into the crapper faster than you could say Mahmoud Ahmadinejad.

This leaves only one other alternative:

Since the clowns aren't doing the job. Send in George Clooney.

Thanks for the email. You may be a great reporter, but from this post you need to brush up on the economics of oil production and naval warfare.

Oil is sold in a near-perfect free market. The profit margins of oil companies are pretty normal. Oil companies make huge gross profits because they have huge volume. They are large because it makes economic sense for them to be large. They are no more in control of the world economy than the dreaded stuffed animal cartel or the radio tuner knob oligopoly.

Yes, the Straits of Hormuz could be shut down. Temporarily. The US Navy would then beat the living crap out of whoever did it, we and our coalition partners with the support of the industrialized world would occupy both sides of the straight to the range of available land-based missiles and that would be that. The loss of prestige and the military thrashing the perpetrators would suffer would emasculate them if not totally destabilize them.

There would be a temporary spike in oil prices and a brief ecological disaster. The long-term effect would be greater stability in the region as the oil supply lines would be permanently protected from there on out.

By the way, the dismissive phrase "Clinton impeachment circus" is a dead giveaway. In James Lileks' terms, you've let the mask slip and have given away your secret identity. Not that anyone would be surprised, mind you.

Instead of sending a cat photo to you, why don't you participate in the Carnival of the Cats?

I never said that oil is anything less than a near-perfect free market. In fact, that is a spot-on way of describing an enormously complex part of the global economy in as few words as possible.

I'm not buying into your Hormuz argument because you miss the larger implications.

Of course the mightiest navy in the world would beat the crap out of one of the weakest. (In fact, Iran's military is weak throughout with the possible exception of the air force, which still flies parts bin F-4s, which remain terrific aircraft.) The larger implications are that a showdown between Little Iraq and Big Uncle at the straits could lead to the regional war that some of us fear. And don't think for a moment that being thrashed at Hormuz might lead to the country becoming destabilized. The central government and ayatollahs have Iranis by the short and curlies. But all of this is probably beside the point, and I should have said in my original post that the likelihood of that happening is remote. When it comes right down to it, Ahmadinejad is a chicken.

By the way wasn't the O.J. trial a circus, too?

Finally, I'll ask Kiko and Kimba if they want to participate in the Carnival of Cats. Methinks it a great idea, but it's up to them.