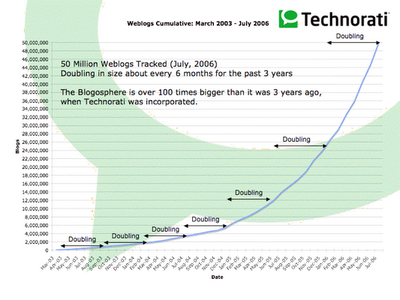 The growth of the blogosphere is pretty much beyond my comprehension. Technorati, the leading blog tracking portal, reports that as of July 31, there were 50 million blogs worldwide and that the number has doubled every six months for the past three years.

To put that in perspective, there are over 100 times as many blogs as there were when the U.S. invaded Iraq. There were 25 million blogs when I launched Kiko's House at the end of last year and today there are twice as many.

Omar at Iraq the Model calculates that there were only four Iraqi blogs in the months after the invasion, while today there are over 200 in English and many more in Arabic. That is astounding and most welcome to us at Kiko's House, where we are supporters of and frequently link to our Iraqi brothers and sisters.

How long can this torrid growth continue?

Frankly, I can't possibly imagine it continuing to grow at this pace - after all, there are only so many human beings in the world! It has to slow down.

Kiko's House is a proverbial drop in the blogosphere ocean, yet the number of our visitors has roughly doubled every two months (with time out for some big technical problems in the spring) and that has been more or less by word of mouth because I positively absolutely refuse to pander, including accepting advertising that would clutter the site but mean additional links and more readers.

Kiko's House recently logged a visitor from China, our 79th country and territory (*). Most folks stop by for a peek and then move on, but there is a hard core group of visitors from 15 or so countries who are regulars.

Other than the fact that no one has tried to sue or maim me (at least not yet), perhaps most satisfying is the length of time visitors spend at Kiko's House.

That number has risen steadily since Day One and now averages a little under three minutes per visit. That's an eternity in cyberspace and means that a goodly number of people are actually taking the time to read my musings and those of our guest bloggers.