Iraq I: Finally Thinking the Unthinkable 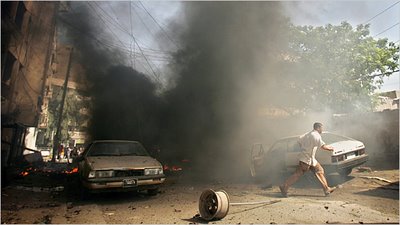 Baghdad residents celebrate Chinese New Year early. Car bomb
blasts have killed over 125 people in the capital this week.
The determination of the righteously incompetent Bush administration to stay its disastrous course in Iraq has been a thing of wonder in the face of sectarian violence that is out of control, taking over 100 civilian lives a day, reinvigorated insurgents nipping at the heels of beleaguered and underresourced U.S. troops in the provinces, bellicose clerics who are stepping up their anti-U.S. invective, bickering between U.S. and Iraqi commanders, a dithering central government in Baghdad that is adept at stealing from the national treasury, and at home poll numbers that remain in the toilet despite the recent rash of "good" news for the president.

So I did a double take when I read the following words at the very end of a long New York Times story (*):

Bush administration officials now admit that Iraqi government’s original plan to rein in the violence in Baghdad, announced in June, has failed. The Pentagon has decided to rush more American troops into the capital, and the new military operation to restore security there is expected to begin in earnest next month.

Yet some outside experts who have recently visited the White House said Bush administration officials were beginning to plan for the possibility that Iraq’s democratically elected government might not survive.

“Senior administration officials have acknowledged to me that they are considering alternatives other than democracy,” said one military affairs expert who received an Iraq briefing at the White House last month and agreed to speak only on condition of anonymity.

“Everybody in the administration is being quite circumspect,” the expert said, “but you can sense their own concern that this is drifting away from democracy.”

What alternatives to democracy?

Finesse the mess until after the November elections?

Cancel Saddam Hussein's hanging, free him from prison and reinstal him as president?

Bring back Paul Bremmer as the head of the Coalition Authority?

Furthermore, who is going to break the bad news to the president, who has been endlessly manipulated by his vice president and defense secretary into believe that everything is hunky dory?

As I have said endlessly (and yes, Cassidy, I originally supported the war), the U.S. has no good options because of its own unceasingly bad behavior and ineptness.

Meanwhile, The Washington Post reported that once calm areas of the country has descended into chaos:

Clashes between rival Shiite Muslim militias erupted Wednesday in Basra, Iraq's second-largest city, when scores of gunmen stormed the governor's office after accusing his supporters of assassinating their tribal leader.

As U.S. and Iraqi forces focus their efforts on taming sectarian violence in Baghdad, Wednesday's bloodshed served as a reminder of the tenuous security conditions across Iraq, and how precariously the country teeters on the edge of civil war.

In once calm southern cities such as Basra and Karbala, a Shiite holy city, fighting between Shiite militias and U.S.-backed Iraqi security forces, as well as among rival Shiite militias, appears to be on the rise. Meanwhile, northern cities such as Mosul, which had faced constant attacks, are experiencing new waves of violence along ethnic and political fault lines.

UPDATE ON THE HADITHA MASSACRE COVER-UP.
The cover-up of the Marine massacre of 24 unarmed Iraqi civilians, many of them elderly and children, last November in Haditha is more extensive than initially thought.

An investigation has found that an official company logbook of the unit involved was tampered with and that an incriminating video taken by an aerial drone the day of the killings was not given to investigators until a general intervened.

More here, as well as my essay The Ten Lessons of the Haditha Massacre here.

TO PUT THINGS IN PERSPECTIVE . . .
The U.S. has now been at war in Iraq longer than it was at war with Germany in World War II. This unfortunate milestone was passed on August 15.

(*) This is what is know in journalistic parlance as "burying the lede," or placing the paragraphs that should be atop a story deep in it -- very deep in it in this especially egregious instance.


(Photo by Ceewan Aziz/Reuters)
Posted by Shaun Mullen at 2:04 AM
Email ThisBlogThis!Share to TwitterShare to FacebookShare to Pinterest

Don't forget that the US has occupied Germany for 61 years after VE day.

The U.S. occupation of Germany ended in 1955 when the Federal Republic was formed. The U.S. has maintained a military presence there since then and will continue to do so for the indefinite future primarily because of Germany's strategic location and the large air base and military hospital complexes where medevacs from Iraq and elsewhere are received. This presence is substantially scaled back from Cold War levels.