Iraq II: If This Isn't Civil War, Then What Is? 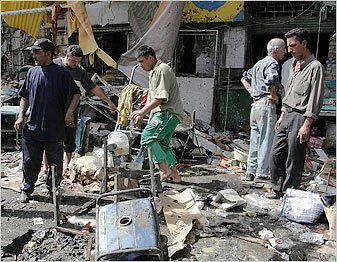 24 dead in Baghdad market district blast
I'm not very good at math, but at least I have my fingers and toes. So by my calculations, about 300 Iraqis have been killed in the first four days of this week in connection with sectarian violence. Several American troops also have died.

It is important to note that most of the deaths did not occur in standoffs with U.S. and Iraqi troops, but rather in random attacks and bombings such as one in the Baghdad market district on Wednesday that killed 48 people, or as a result of fighting in an outlying city like Diwaniya, where at least 67 people, including dozens of looters, were killed siphoning gasoline from a government pipeline following bloody clashes between an Iraqi Army unit and sectarian militia. There were another 23 violent deaths on Wednesday in Baghdad and elsewhere.

It would appear -- and this is subjective until more detailed information is available -- that the transfer of thousands of troops from outlying hotspots into Baghdad for the ongoing security sweep has had a predictably horrible consequence: an upsurge in violence in the areas that the troops had previously patrolled.

I pointed out this perverse dynamic way back when in this post but take no comfort at having been correct. In fact, I would much rather have been wrong.

MUCH BLOODSHED, NO CONSENSUS
The Belmont Club has a comprehensive wrapup from commentators who range across the spectrum from believing that Iraq is a fiasco to a work in progress.

The consensus is that there is no consensus.

(Photograph by Namir Noor-Eldeen/The Associated Press)
Posted by Shaun Mullen at 1:18 AM
Email ThisBlogThis!Share to TwitterShare to FacebookShare to Pinterest