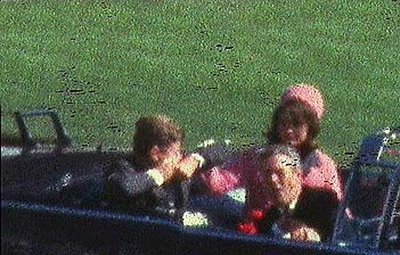 A key piece of evidence supporting the lone gunman theory in the John F. Kennedy assassination may be faulty.

Chemist Pat Grant, director of the Lawrence Livermore Laboratory's Forensic Science Center, and metallurgist Erik Randich found that the chemical "fingerprints" used to identify which bullets that crime scene fragments came from are not distinctive as had been previously believed.

Says Gary Aguilar, a San Francisco ophthalmologist and single-bullet skeptic who has studied the Kennedy assassination for more than a decade:

I've spoken with people on both sides of the conspiracy divide and there's no question but that (Randich and Grant's) work is going to be very difficult, if not outright impossible, to refute. It looks impregnable.

The government's claim that Lee Harvey Oswald alone killed JFK triggered a bitter debate between conspiracy theorists and lone gunman supporters that rages to this day.

In 1964, the Warren Commission concluded that Oswald fired just three shots from the Texas School Book Depository in Dallas.

It asserted that the first shot missed entirely.

The second shot passed through the president's neck into Texas Governor John Connally's body under his right arm, out through his chest and then splintered his wrist and wounded his left thigh.

The third shot fatally hit Kennedy in the head.

Even though three bullets were involved, this scenario became known as the "single-bullet theory" because it requires the second bullet to account for all the nonfatal injuries to both Kennedy and Connally.

The injuries to Kennedy's neck and to Connally occurred within a split second of each other. So either the injuries to both men came from a single bullet from Oswald or from at least two bullets from more than one shooter because Oswald's rifle couldn't have fired two shots in such rapid succession.

So in order for Oswald to be the lone gunman, it had to be a single bullet.

Grant and Randich say the bullet-lead analysis done on the fragments was faulty.

The FBI claimed that like a fingerprint, each batch of lead has a unique chemical signature, so the specific amounts of impurities in a lead bullet could match it with other bullets from the same batch. For example, if bullets at a suspect's house were found to have the same impurity signature as a bullet or fragment found at a murder scene, it was treated as evidence tying the suspect to the crime.

Randich's training as a metallurgist told him there was something wrong with this reasoning.

By analyzing years of data kept by lead smelters, Randich found that batches are not unique, and bullets from different batches of bullets poured months or years apart could have the same chemical signature. And bullets poured from the start of a batch could differ slightly, but measurably, from those at the end.

He has testified in about a dozen criminal cases. Because of his work, courts now reject bullet-lead analysis and the FBI no longer uses it as evidence.

Whether single-bullet believers will be convinced is another matter.

More here (registration may be required).
Posted by Shaun Mullen at 3:36 AM
Email ThisBlogThis!Share to TwitterShare to FacebookShare to Pinterest