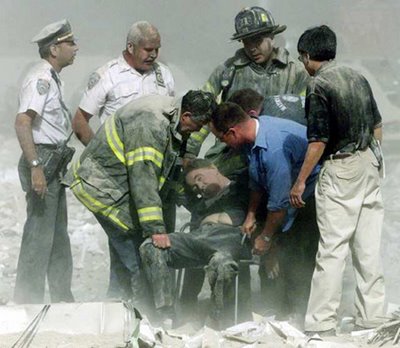 A modern day Pietá
The collision between religious orthodoxy and social reality can be pretty darned ugly, but the mess the Roman Catholic Church has made of its two biggest 21st century controversies – pedophile priests and homosexual priests – is enough to make Job spin in his grave.

What the hell does this have to do with the fifth anniversary of the 9/11 attacks? Read on . . .

My primary concern here is gay priests, but you can’t discuss them without a stopover at the sordid sexual abuse scandal that has rocked the church to its very foundations in the U.S., Canada, Ireland and elsewhere.

The sexual abuse of children is a mortal sin for Catholics, of course, but it is difficult to judge which has been worse – the priests who have fondled, sucked and sodomized countless young innocents or the cover-up of and indifference to their behavior from local diocesesan administrators up through an imperious church hierarchy to the Vatican.

Homosexuality also is a mortal sin for Catholics, but that sexual orientation is increasingly and rightfully accepted by the social mainstream, including many in the Catholic laity. This has not prevented the same Vatican that turned a blind eye to pedophile priests to promulgate a policy that bars gay priests and gays who want to become priests.

An ostensible purpose of the policy is to take a strong stand against the church's gay subculture. But the policy is having a doubly negative effect -- driving out celibate gay priests who are a threat to no one while discouraging celibate gays from joining an already depleted priesthood.

I have no personal stake in this. I'm not gay. My father was a lapsed Catholic and my own view of the church is that it is an enormously powerful and obstructionist guilt machine that has done more harm than good.

I do acknowledge that there is a connection between pedophilia and homosexuality in some instances, but there have to be a whole lot of gay priests – and gays who would like to become priests – who are on Pope Benedict XVI’s hellbound train for the wrong reasons. Chief among those reasons is the Vatican's need to find scapegoats for the church's own despicable conduct in the sex abuse scandal.

Now that I've gotten that off my chest, we can turn to the story of Mychal Judge, a 68-year-old priest and New York Fire Department chaplain, or Father Mike as everyone called the beloved Benedictine.

Father Mike was uptown at the Church of St. Francis of Assisi, where he ministered to the wealthy and homeless alike, when the first plane crashed into the North Tower of the World Trade Center on September 11, 2001. He donned his FDNY chaplain’s uniform and rushed to the towers, where he briefly paused to pray with Mayor Rudolph Giuliani before running over to a dead firefighter and a woman who had fallen on him after jumping from the North Tower.

Father Mike had removed his fireman's helmet to administer the last rites and was anointing Firefighter Danny Suhr and the woman with holy water when he was struck in the back of the head and mortally wounded by a chunk of falling debris.

You may not realize that you knew who Father Mike was until you reflect on the image above. Reuters photographer Shannon Stapleton's photograph, one of the most gripping images to come out of that horrific day, is a modern day Pietá. Yes, that’s Father Mike on the makeshift gurney.

You probably also didn’t know that Father Mike was an acknowledged homosexual. And so beloved that his death certificate bears the number 00001 – the first official World Trade Center casualty.

But as inspiring as Father Mike’s life may have been, not to mention his bravery on 9/11, he would not have been welcome in today’s Roman Catholic Church, which according to its anti-homosexual policy believes that gays "have no social value" and, moreover, "no moral virtue."

That truly is a sin.

9/11: THE DOCUMENTARY
A feature documentary film has been made on Father Mike. "The Saint of 9/11" is directed by Glenn Holsten and narrated in the priest's own words by legendary actor Sir Ian McKellan.

9/11: THE LAME GAME
This just in: Osama bin Laden is not wanted by the FBI in connection with the 9/11 attacks.

The Al Qaeda leader is on the FBI's "Ten Most Wanted" list for his role as the mastermind of the deadly U.S. embassy bombings in East Africa in August 1998.

But The Washington Post notes in a story that the omission is because of a Justice Department's decision, so far, to not seek formal criminal charges against OBL for the terror group's most notorious terrorist attack, but does not explain why. I believe this is called bureaucratic timidity.

There's no mystery here. They could add 9/11 on there, but they have not because they don't need to at this point. . . . There is a logic to it.


The absence rightfully gives ammunition to 9/11 conspiracy theorists who think the U.S. government was behind the attacks.

Will Bunch weighs in on this rank silliness at Attytood:

[T]he failure to charge bin Laden in the first place does speak to the kind of questions we've been raising all along about the current Bush strategy of fighting terrorism.

During the 1990s, the perpertrators of the 1993 World Trade Center bombing and some involved in the 1998 embassy bombings were brought to justice in a court of law, where jurors found the evidence against these terrorists overwhelming. The much maligned "law enforcement" approach also led to arguably the biggest anti-terrorism success ever, the foiling of the 2000 Millennium bomb plot.

That said, few would argue that Clinton's efforts to go after bin Laden himself were weak, with a misdirected counterstrike in 1998 and bungled opportunities to nail the terrorist leader. But with Bush, we've seen an approach that's 100 percent "war," and 0 percent "justice."

9/11: THE COMIC BOOK
Should you have missed my mention of it last week, Slate is excerpting a terrific new book -- "The 9/11 Report: A Graphic Adaptation" -- each day through to September 7. The author-artists are Sid Jacobson and Ernie Colón.

Click here to begin reading. (The series began on August 21, so you will have to click your way back to start at the opening frame.)
Posted by Shaun Mullen at 3:58 AM
Email ThisBlogThis!Share to TwitterShare to FacebookShare to Pinterest

I would like to point out that Fr Mychael was homosexual in orientation only. By all accounts, he was celibate.