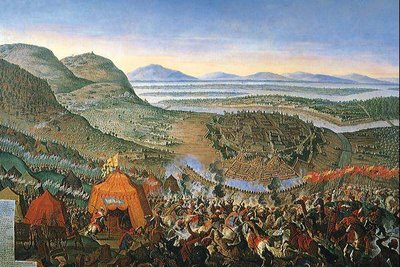 September 11, 1683: An earlier high water mark of militant Islam
It seemed like the whole world was spread out before us from our vantage point atop the sand dune. The gibbous moon was behind our backs, its surreal light casting shadows on beach and ocean. It was still nearly an hour before sunrise, but a sliver of hot pink hugged the horizon to the east. Venus sparkled overhead. Arrayed around it were familiar constellations, dominated by Orion and his brilliant belt.

The Dear Friend & Conscience and I settled onto the cool sand. The only sound was the surf, a mere whisper at low tide. The DF&C saw the first shooting star of the morning and I the second. For the next half hour or so, these fiery bullets zipped across the northeastern sky at two- or three-minute intervals. Not the most thrilling Perseid meteor shower of our experience, but no matter.

The pink sliver had grown and taken on an orange-red by the time the last meteor faded, backlighting an ocean-hugging cloud bank that created the illusion of a distant mountain range. Orion and his companisions had evaporated into a brightening blue-gray sky and only Venus, now a faint twinkle, was visible when the flickering lights of a jetliner caught my eye. It was approaching from the east. Probably Great Britain, perhaps Europe.

* * * * *
The sight of a jetliner high in the sky used to be a thing of beauty for me, a reason to anticipate travels to come and recall travels past. But the lights of the far away aircraft on this morning did not gladden my heart. They inspired only sadness and foreboding.

This was going to be the summer that I read a lot of fiction. I did wade through Don DeLillio's "Underground," but only just barely as the rip tide of world events kept sucking me toward weightier tomes on the fanatical religious hegemonists who have so often determined the course of history -- and are at it again.

I'm talking about the right-wing Christianists to whom George Bush has sold his soul who see the war in Iraq in the terms of a holy war. And the Muslim fanatics who want to hijack jetliners like the one I saw on the dune, fly them to our shores and kill people.

I had finished reading "The Looming Tower: Al-Qaeda and the Road to 9/11," Lawrence Wright's illuminating new book, the previous evening and was reflecting on a question that he poses as I watched the jetliner.

Why did these men turn against , a highly religious country that so recently had been their ally in ? In large part, it was because they saw as the locus of Christian power. Once, the piety of the Muslim mujahidden and the Christian leaders of the government had served as a bond between them. Indeed, mujahidden leaders had been considerably romanticized in the American press and had made tours through American churches, where they were lauded for their spiritual courage in the common fight against Marxism and godlessness. But Christianity – especially the evangelizing American variety – and Islam obviously were competitive faiths. Viewed through the eyes of men who were spiritually anchored in the seventh century, Christianity was just not a rival, it was the archenemy. To them, the Crusades were a continual historical process that would never be resolved until the final victory of Islam. They bitterly perceived the contradiction embodied by Islam’s long, steady retreat from the gates of , where on September 11 – that now resonant date – 1683, the king of began the battle that turned back the farthest advance of Muslim armies. For the next three hundred years, Islam would be overshadowed by the growth of Western Christian societies. Yet bin Laden and his Arab Afghans believed that, in , they had turned the tide and that Islam was again on the march.

. . . If America owned the future, the Islamic fundamentalists laid claim to the past. They were not rejecting technology or science . . . But they were ambivalent about the way in which technology weakened the spirit. This was reflected in bin Laden's interest in earth-moving machinery and genetic engineering of plants, on the one hand, and his rejection of chilled water on the other. By returning to the rule of Sharia, radical Islam could draw the line against the encroaching West. Even the values that American advertised as being universally desirable -- democracy, transparency, the rule of law, human rights, the separation of religion from governance -- were discredited in the eyes of the jihadis because they were Western and therefore modern. Al-Qaeda's duty was to awaken the Islamic nation to the threat posed by the secular, modernizing West. In order to do that, bin Laden told his men, al-Qaeda would drag the United States into war with Islam -- "a large scale front which it cannot control."

* * * * *
Wright, of course, is not talking about all Muslims, nor am I. After all, nearly one in five people in the world is a Muslim. Neither do I overlook the legitimate grievances that Muslims have with America and its colonialist-imperialist fellow travelers in the West. Apostates all.

But a small minority of Muslims have (pardon the term) hijacked Islam and turned life as we know it on its collective ear. Islam is the only religion at this particular time in history so at war with itself and its most fanatical followers mass murderers.

Andrew Sullivan at The Daily Dish sums up this perverse phenomenon in response to a Muslim reader who took great offense at his harsh comments about his faith in a previous commentary:

The sad truth is: no religion in the world right now has as many internal problems as Islam. The Muslim faith is being used to sanction mass murder; Islam is engaged in a civil war in which some Muslims are blowing up other Muslims' mosques and holy places; Islamic regimes are hanging gays and enslaving women and putting diapers on goats, while holding the world hostage to their own desire to wreak havoc on civilizations that have surpassed Islam in power and democratic freedom. I'm sorry if the truth hurts. But I'm not interested in writing lies. If more Muslims were as "emotionally devastated" by the carnage wrought in their name as the words on a blog, Islam would have a much healthier future.

Aslan, the Iranian-American author of "No God But God: The Origins, Evolution and Future of Islam," believes that Islam is not inherently anti-democratic and the 9/11 attacks were a reaction against moderate Islam and not the U.S.

Said Aslan in an interview:

Immediately after Sept. 11 . . . these forces of extremism and militantism were galvanized and were really given this strength, both in numbers and in ideology because so many people were afraid to speak out against them. This was not only because they feared for their lives, but also because most Muslims didn’t accept the U.S. actions even though they disagreed with the actions and ideology of the Taliban and of al-Qaeda.

I think that pendulum has swung now. We are now four or five years removed from those events, and a sense of contemplation and calm has descended upon the world. Not just in Afghanistan and Iraq, but throughout the Middle East, Muslims themselves are saying: enough is enough. This is not our faith. This is not how we’re going to move into the next century.

These words were uttered before the Israeli-Hezbollah war. To the shock on the many pundits who thought that the IDF would stomp a lowly terrorist army, the war has been a draw and Israel has not even gotten back the kidnapped soldiers that provoked the conflict in the first place.

[T]he lesson of Iraq and, now, Lebanon, is that zealots make tough enemies. It was one thing for Israel to fight apathetic and hapless Egyptians, Iraqis, Jordanians, Syrians and Lebanese. Those armies consisted of the indifferent: Sure, these Arabs opposed Israel, but they were mostly unaffected by it and would rather live with it than die fighting it. Even the Palestinians proved to be not much of a battlefield foe. This has not been the case with Hezbollah or, in Iraq, the various groups of fanatics who would blow themselves up for reasons that we could not begin to fathom. Hezbollah is now described in terms once reserved for the Japanese army of World War II. "If you are waiting for a white flag coming out of the Hezbollah bunker, I can assure you it won't come," said Brig. Gen. Ido Nehushtan, a member of the Israeli army's general staff.

This zealotry, this ideology, this religious fervor is not something we in the West -- and that includes Israel -- know how to deal with. The sheer scale and number of suicide bombings in Iraq was once considered inconceivable. Iraq, after all, was extolled as one of the more secular Arab states, which was among the reasons why some otherwise sane people predicted an easy U.S. victory followed by the national singing of "God Bless America."

Iraq in the post-Saddam Hussein era seemed to be the perfect laboratory for Aslan's theory because of its rich religious history and diversity of its sects, including the majority Shiites and minority Sunnis.

But today Iraq is in civil war -- well, arguably a religious war -- its sects and secularists outraged at U.S. hubris and hypocrisy and unable to find their way out of a debacle substantially not of their own making but one that they have made far worse because of the blood lust of radical Islamists.

Instead of being a model, Iraq has descended into a barbarity that the followers of Allah who massed at the gates of Vienna on another September 11th would approve of. These invaders, like Al Qaeda and their radical ilk, were interested only in killing and conquering, not governing.

Posted by Shaun Mullen at 3:12 AM
Email ThisBlogThis!Share to TwitterShare to FacebookShare to Pinterest